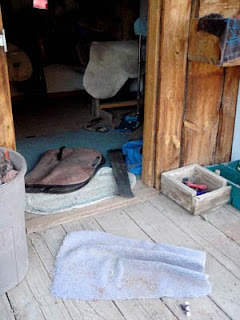 Wake up this morning - I feel it - something's wrong. Things are amiss. Run outside.

Something else out of place.

A big round brown horse. Outside the tackroom. Indulging where he shouldn't be. With a stirrup - and attached saddle - stuck through his foot.

The thief is Dudley. He escaped from his big pen. I knew it was coming - the night before, he'd ripped the white tape down that made part of his fence. It used to be electrified, but we had to move the electricity to the other pen, because Jose figured out how to step right over his fence. Dudley figured out now he could take down his white tape fence. I tied the tape back up, (Dudley watched me) but it was only a matter of time before Dudley got out.

Which he did last night. He must have first cleaned up all the hay laying out between the tackroom and the penned-up Canadian horses. Then he must have gone into the tackroom (not Dudley's fault - the door's been removed long ago, because it broke off its hinges). The bugger must have gone straight for my saddle, which had treats in the Raven bag. Dudley's got a one-track nose - dictated by his obsessed belly!

He pulled the saddle off its rack, and while opening and emptying the Raven bag of treats (I'll give him credit - he did not rip the bag in any way), somehow got his foot stuck in the stirrup, and left the tackroom dragging the saddle (with attached girth, and breast collar) back outside, where he went back to dining on hay by the Canadians (ooh, we are hoping it wasn't alfalfa, that could mean trouble). That's where he was when I saw him this morning. 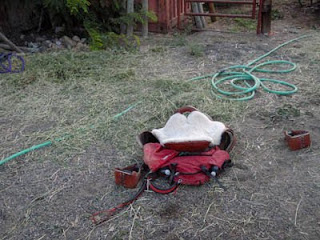 I was startled to see him out there, shocked to see him with the stirrup (and therefore saddle) stuck around his foot, shocked that he wasn't panicking. I yelled for help, but Dudley still didn't panic (heck, he'd been wearing and dragging the saddle for a while, what's the big deal?), and Steph came out and worked the stirrup off his foot. 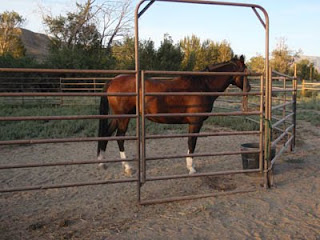 He's in the round pen until we can get the electricity back on his pen.

Not that the Escape Artist Extraordinaire hasn't escaped from the round pen once already, (and from everywhere else) and I'm not convinced electricity will keep him in his big pen... which he's escaped from several times anyway, though through different means than the white tape.

What to do with DUDLEY!

Guess I'll be hotwiring some fence this morning.
Posted by The Equestrian Vagabond at 8:00 AM