I was saddling Jose this brisk breezy morning for a ride, 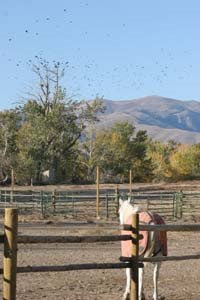 when I realized the cawing I was hearing - lots of cawing - was from Crows - at least a hundred of them. What's unusual about that is we have Ravens here, not Crows.

The two are of the same family Corvidae (as are Jays, Nutcrackers and Magpies), though they are different species - similar cousins, you might say. The Crow is smaller, usually has a higher voice, and has a fan-shaped tail in flight opposed to the Raven's spade-shaped tail.

They rarely ever mix, and I don't recall ever seeing a Crow out here.

This was a big gang of Crows - a 'murder' of Crows, 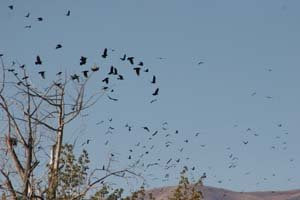 gracing our little drainage with their presence as they randomly passed through, on their way to... somewhere. They came from downstream, landed in our cottonwood trees along the creek, flew up and around in wavy circles, 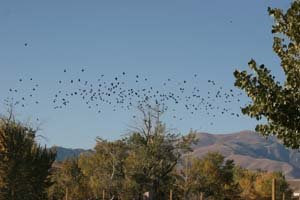 landed, flew, landed, slowly working their way up the drainage. You could hear them cawing as they worked their way up Pickett Creek. 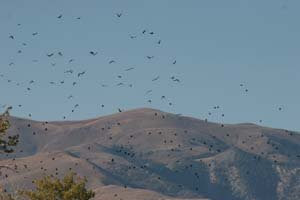 Clearly, they weren't all business and were having some fun, and probably had come from a communal night roost, and were generally lacking in purpose. 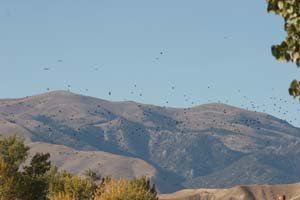 Three remained behind, sitting in one of the trees for a while, 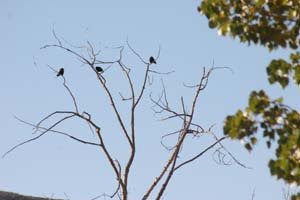 maybe having a rest from a long morning of carousing and covering long distances, letting out the occasional caw.

The hallowed event had indeed been something to Crow about.
Posted by The Equestrian Vagabond at 8:38 PM