I'd been inside watching the Breeders' Cup all day, and just finished watching Curlin get defeated in the Classic by Raven's Pass (guess why I liked that horse), and I was going to go ride my horse Stormy - on a birthday ride.

I was just putting my shoes on, when Connie came in and said, "You better go look at Stormy. He's got an abscess on his neck. I put him in the pen. You might want to put a hot towel on him."

What happened to him now!? If it's not one thing with Stormy, it's another! He's lame half the time from navicular, especially after shoeing. Time before last he got shod, it was 3 weeks before he was rideable. But before I could ride him, he ran in with the herd from up the canyon, and was so dead lame he couldn't put a hind leg down for a week (he pulled a muscle up high). When he finally got over that he got such a vicious bite on his back I couldn't put a saddle on him. When that healed, he got shod again, and was lame for 3 weeks. I'd just started riding him again 3 days ago.

Now - an abscess! Who kicked him!? Or what did he puncture himself on and who ran him into it!?

I ran outside to kick some horse butt... and this is what I saw. 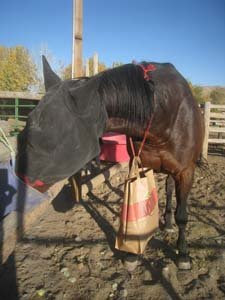 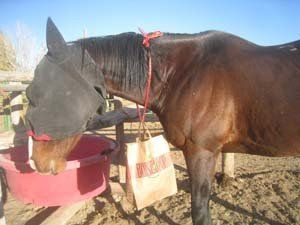 Stormy helped me empty the bag and open the presents. 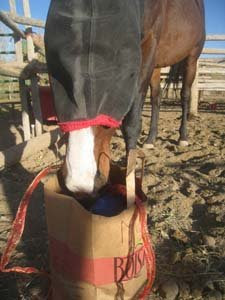 Then we went on our Birthday ride.

A great way to celebrate the day. 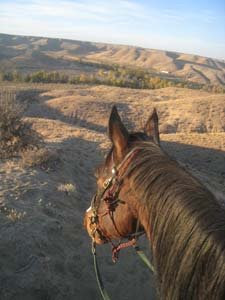 Posted by The Equestrian Vagabond at 7:19 PM