Riding With The Italian Champion! 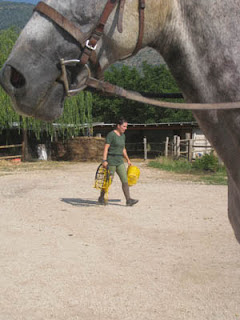 Here I am again, gallivanting off to another endurance family, who are welcoming me into their midst. I don't know them, and they don't know me, but Fausto has arranged it, so off I go.

After 3 train changes and a bit of adventure, I got off in the little village of Popoli - I'm not sure if you'll find that on too many maps - in the Abruzzi region (in the center) of Italy. It's in the foothills of some surrounding mountains that provide plenty of skiing in the winter, and plenty of horseback riding activities and hiking in the summer. A few people got off the train here with me, and there was only one person waiting at the station: Adriano Marrama. He didn't speak English, and my only Italian words are those that happen to be the same as the few Spanish words I know - in other words, it was hopeless. We tried and tried to communicate, but other than the weather, and scenery, it was pretty hopeless and we just laughed at each other. 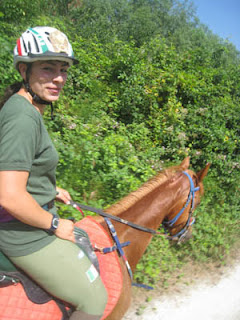 just won the 160 km Italian Championship in Assisi a few weeks ago, on one of the 52 horses (!) in Adriano's endurance stable, I Cavalieri dell'Antera. **Author's note: There is controversy surrounding this, as I understand it: Chiara was the first to arrive at the finish but was declared to have made a mistake on course, as did several others. Chiara and some of the other riders contend that one area of the course was not marked, nor were there any officials to point the way. Simona Garatti was declared the official winner, but perhaps this is still in contention. **


Adriano took me to the Albergo (hotel) Moretto in Pratola, owned by his sister Bruna and his niece Annamaria, who welcomed me and plied me with pizza and beer - very welcome after the challenging train rides! Adriano left me there to go take care of horse business, then came back at 10 PM to pick me up and take me to dinner with daughter Chiara and her boyfriend, and daughter Marinella and her husband Jean Felice. It was a loud Saturday night crowd at the restaurant - a typical European Saturday evening dinner - and it wasn't till 11 PM that the others arrived, after a long day at a "pony endurance ride" with one of the youngsters they teach.

After a filling dinner, Adriano dropped me back at the hotel around midnight, with instructions from Chiara - be ready at 8 AM, with your riding clothes on!

Woohoo - I unpacked from the bottom of my suitcase the helmet and chaps I've lugged around for 4 weeks (and for 5 weeks, on the trip before this one) and put them on! Adriano picked me up at 9, and we were off to his I Cavalieri dell'Antera stables!

Adriano started his stable 20 years ago for trekking. Five years later when his daughter Marinella started endurance riding, it became primarily an endurance stable. Chiara did her first short endurance ride when she was 11 years old. Now, it's a very busy stable, to say the least, with, between the three of them and one groom, horse trekking (with Adriano), endurance riding and training (with Chiara), and lessons and handicapped riding (with Marinella). In November they will begin building a hotel higher up in the hills - in the middle of their olive orchards - for an agriturismi (farm-stay) accomodation, which will fit in nicely with the trekking business.

Horse pictures and paintings by children decorate the walls of the snack bar area, as do numerous endurance trophies the family has collected over the years.

Chiara and Adriano saddled up horses for 4 of us, and Paulo from Rome accompanied us on his huge Hannoverian gelding, for a ride in the Italian countryside - a first for the Raven and me!

It's easy to see why Chiara, at such a youthful age, attained the title of Italian champion. First and foremost, she cares for her horses and enjoys each of them - "they are like children. Each one is different. I love riding them all!" She's very concerned about their well-being, and very aware of the need to take the time for the development of the whole horse - muscles, bones, metabolics, and the mind, especially their mind. (The mare on which she won on at Assissi will probably have the rest of the year off to relax). You can go fast on a horse, she says, but you have to go step by step to get there. She very much respects her sister Marinella and her knowledge and horsemanship, and she aspires to be more like her!

Chiara may ride fast in races when the horse is ready, but like many other top stables around the world I've visited, she doesn't regularly train hard and fast. She knows it's good, for the body and the mind of the horse, just to go out and have an easy hack or just walk, to let the horse know it's okay to take your time and relax.

We had a lovely 90 minute ride through the rich green countryside of Italy, with my mount being a 4-year-old mare that Adriano predicts will be another Italian champion. I had to agree that this mare was pretty nice at this stage... 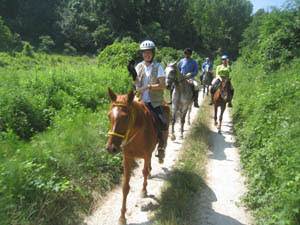 After the pleasant ride I had lunch at the house with the family. And when I say family lunch, I mean Family Lunch: Mom, Dad, two sisters, husband of sister, Grandma, and Auntie Marianna, who kept piling food on my plate because I'm so skinny. She wanted to fatten me up in this one meal. We had piles of fresh salad, vegetables, and fruit from the abundant garden out the front door. Marianna would spoon one helping on my plate, then another "Due?" "No! No due!" I'd say, and she'd plop the 2nd helping on my plate anywy. Of everything! I'd surrender - there was no arguing. "OK, due!" "Tre?" "No three!"

Which meant, by the end of lunch, I was so full I could hardly move from the table. They asked if I needed a nap? They would take me to the hotel to rest. Oh, no, I didn't think I needed a nap. Marianna took me back to the hotel anyway - stopping to show me a little scenic mountain canyon sanctuary on the way - and of course I fell asleep at the hotel.

Adriano returned at 5 PM and picked me up and took me back to the stables, for another ride! The weather had actually turned pleasant - instead of blazing heat, the sun was obscured behind clouds - there were even little rain showers around, and possible thunder clouds! - and there was a very nice breeze.

This time I got to ride a mare that Chiara will probably ride in Gubbio (I wanted to say, "Wait! Are you sure?!"), and I went out with Adriano and another man, on a different track, hard and soft dirt roads past rolling fields and olive orchards.
This mare was also quite nice; we walked at first, then had a good climb at a trot or canter, before coming to a paved road. We followed this into a regional park full of people walking and biking, and where there was a little bar - and we parked our horses and went and had a drink! Chin chin! We toasted. "Interval training," said Adriano - work the horses, give them a rest, (and us a beer), ride them back. 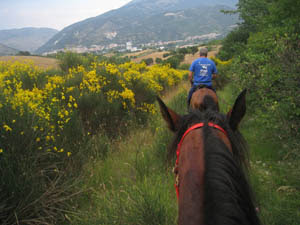 After our refreshing break, we mounted up and rode back home, walking all the way. You could tell the horses enjoyed the outing - they were willing and strong on the way out, and willing and relaxed, moving out, on the walk back. Adriano made me laugh because he was always on his cell phone - sometimes two of them! The mare was quite pleasant, as was the scenery and the cool breeze, as was riding in Italy! I told Adriano it was beautiful here, but he said in Italian - and I understood - if I thought this was pretty, I have to come back and go trekking up into the mountains - it is stunning up there. Chiara confirmed it - and confirmed I have to come back and see it!

We got back at 8:30 PM and I had dinner with the family and more friends again. This time, Mom Francisca took over the piling of my plate, and didn't take no for an answer. I think I did pick up a few pounds this weekend!

The friends took me back home to the hotel, where, after a hard day's work - two huge meals and two great horseback rides with a new family in Italy - I fell into a sound deep sleep.

The Marramas put me on the train back to Gubbio in the morning - after racing all over the place looking to buy a ticket for me, then refusing payment - and all I had for a thank you, after the great rides and great hospitality, was two words, a heartfelt Thank You!

Happily, I'd see them again in two days in Gubbio at the Nations Cup. 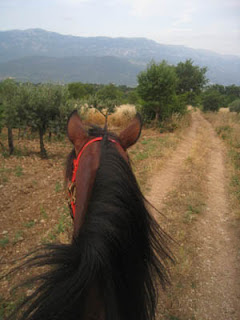 Posted by The Equestrian Vagabond at 1:05 PM