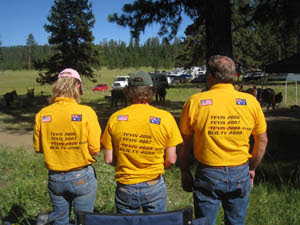 Like a great number of other people, my plans for going to Tevis changed when the decision to cancel because of the smoke and fires was announced. So I headed off to Bandit Springs, Oregon, with Idaho locals Nance and Bruce Worman and Bruce's daughter Isabelle, where for the 18th year an endurance ride took place in the Ochoco National Forest on the eastern slope of the Cascades Mountains.

While ride manager Jannelle Wilde was sorry about the cancellation and smoke and fires and headaches (and worse) for many people, she was tickled that at least 15 extra riders that had been headed for Tevis decided to give Bandit Springs a try this year. There were plenty of rides to choose from: 100 miles, 80 miles, 50 miles, 30 miles, a 10-mile trail ride, and for the very intrepid: a Ride N Tie. And not only a 30 mile Ride N Tie, but an elevator - if you didn't get enough at 30 miles (!), you could elevate up to 50 miles, 80 miles, or 100 miles.

The distance were covered over 3 loops, of 10, 20, and 30 miles, with 90% of the trails on single-track dirt, and the rest on 2-track logging roads. There would be a good chance of seeing wild horses on loop one, and maybe a stray elk or two on all of them. You'd be riding over or near historic and prehistoric archaeological sites and trails, old cabins, camps and mines. And you'd have a bit of the full moon if you were doing the longer distances.

And, icing on the cake: it would be a pleasantly cool day with no fires to worry about. Veteran endurance riders the Vanderfords - Hugh and Gloria, and their great granddaughter Haily Daeumler - arrived on Tuesday, to get out of the smoke and fires in California. "We've had lovely blue skies and white clouds, and no smoke!" Gloria said. Hugh would be riding the 80 miler ("I'm a wimp"), and Haily - 14 years old as of today - attempting to complete her 4th 100 miler, with Gloria.

Ride camp was in horse heaven: 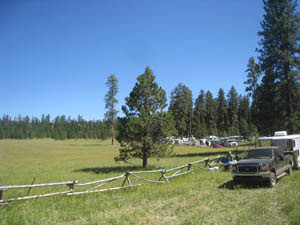 a meadow with horse-belly-high grass that you couldn't pull the horses' noses out of as soon as you unloaded them from the trailer. And oh I've missed the forest - I love the desert, but it's the forest that really gets to me: here in the dry eastern slope forests, there are the blooming flowers - purple lupines, white yarrow, red Indian paintbrush, orange columbine; there is the smell of the firs, and the Jeffrey pines that when you stick your nose in the cracks of the bark, you smell vanilla (I hugged one of them!); there is the sound of the wind in the pine needles (which is different from wind in leaves), and cheeseburger birds (the chickadees that sound like they're saying "cheese-burger!").

Coming from furtherest away - and diverting here from Tevis - was Melissa Longhurst from Australia. She'd be riding Ernie Schrader's National Show Horse, a big paint named Captain Calypso. The first thing she asked me was, "How's the Raven?" I'd met Melissa last year at the Imbil ride in Queensland, Australia - by which time I'd lost the Raven I. So while she and half of Australia knew all about the Raven and his exploits up until his disappearing, Melissa had never actually met the Raven. That changed when I told her I'd brought Raven II along - I was hoping to pick up a horse to ride here at Bandit Springs at the last minute so brought the Raven and the Raven bag along. I produced the Raven for an introduction, and Melissa said, "Maybe the Raven wants to ride with me!"

Gasp! The Raven riding with somebody else - why, it had never even been considered - the idea never even conceived! And riding with someone representing another country with a big Raven following - what a great idea! I told Melissa, "It's a B - I - G responsibility you know," and very solemnly Melissa said she was well aware of that. So with a few butterflies, the kind I don't get when I ride, I agreed to attach the Raven in his Raven bag to her saddle sometime tomorrow. 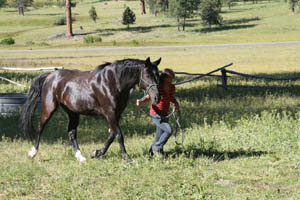 There were, at first glance, a good number of lame-looking horses at the vetting in. Only they weren't lame; they were gaited horses - Tennessee Walkers, Rocky Mountain horses, Missouri Foxtrotters. Many of them didn't trot - they paced (instead of diagonal legs moving forward simultaneously, the legs on the same side move forward simultaneously) which produces a sort of rocking and rolling motion, or they had a running walk, a unique 4-beat gait. I've ridden and packed with Missouri Fox Trotters, and while the pace to me feels awkward at first, it gets to be a very smooth, ground-covering gait to ride. Several of the "gaiters" were asked for a second 'trot out' - but all of them were sound. And they all made me want to hop on them and try them out!

At the ride meeting, after outlining the basics, Jannelle handed out half a dozen empty wine bottles to people. "I want you to hold on to these bottles. And if you hear anybody whining tomorrow, hand them your Whine Bottle!" Endurance riders don't usually do too much whining, and with the heavenly setting and good group of Northwest endurance riders and others from further away, it didn't seem likely the bottles would change hands too much over the weekend.
Posted by The Equestrian Vagabond at 7:45 AM