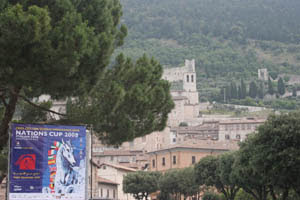 It's not just a love for endurance horses and riding, or his enjoyment of organizing rides, or his love of his hometown of Gubbio and his desire to share its history and beauty and show it off to the world that causes Fausto Fiorucci to go to the time, trouble, and expense of putting on an international endurance ride. It's also his passion to widen the popularity of endurance in Italy and make it more accessible to more riders, and to elevate the profile of the sport and introduce a larger public.

In 1998 his Faula Arabs stable joined an association with the city of Gubbio - hence 'Faula Arabs Gubbio' - to make Gubbio a center of excellence for endurance in Italy, and around the world. With endurance it's possible to blend sport, culture, history, and tourism together, and perhaps there is no better place in Italy than Gubbio in which to take advantage of this.

While the city of Gubbio has long been famous for its archaeological history (traces of prehistoric settlements from the Paleolithic times have been found; Gubbio was an ally of Rome as early as the 3rd century BC), its numerous well-preserved medieval churches, city walls and Roman theatre, and its festivals (Procession of the Dead Christ on Good Friday, The Race of the "Ceri" on May 15th, the "Palio della Balestra" - Crossbow Festival in May, and the biggest Christmas Tree in the World), as a recent development - since 2003 - Endurance Gubbio has developed into one of the most significant events in the city. 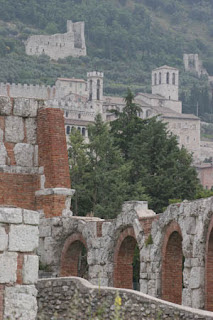 And it's not just another endurance race in Europe, but a CEIO Nations Cup. It's like the European or World Football Championships (by the way, Spain just won the European Football Championship on Sunday) - a cup for endurance riding nations to compete in. This is the future of endurance, Fausto believes: a way to involve more than just individual endurance competitors, by developing a strong team sport, encouraging larger national teams, and thereby providing more riders to compete against each other. Instead of one main goal each year - the European or World Endurance Championship - there are several CEIOs for which to constantly prepare and develop teams for. In addition, the Nations Cup rides "promote solidarity and dialogue between nations" - they are venues from which to share and learn from each other - and to cast an eye toward future participation of endurance as an Olympic sport.

Each country may establish a single CEIO which takes the name of the country putting it on; and at the end of the year, a final order of placing on the circuit is calculated. This year there are four CEIO Nations rides: Belgium, France, Gubbio, and Portugal; and next year England will also have one. Riders must be chosen by their federations to participate in the Nations Cup rides.

The vet gates and finish for the Gubbio Nations Cup - it's now a fixed trail, marked by permanent wooden signposts - (and the 120 km and 93 km rides) on Saturday are right beside the remains of the Roman Theatre (built in the 1st century BC to accommodate 16,000 spectators), with a splendid picturesque view of the ancient city of Gubbio spread out on the hillside above. 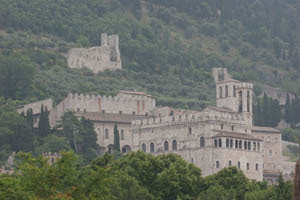 Posted by The Equestrian Vagabond at 7:08 AM