The Ride of March

On a beautiful Owyhee spring day, Nance and Joannie showed up with Nance's 2 horses, and Karen S brought Gil; Connie and Steph and I saddled up to join them for a mini spring endurance ride from the Teeter Rancho. 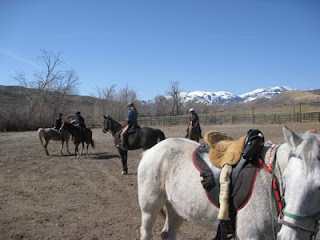 And a lovely 3rd day of spring it was, sunny, cool, a bit of a breeze (3 layers for most of us, 5 layers for Steph), 6 fresh horses thinking they were out for a mini-competition. Snowy Owyhee mountains in the background, little yellow buttercups starting to bust out underfoot.

We headed up and over the ridge on our short 'Tevis Trail', 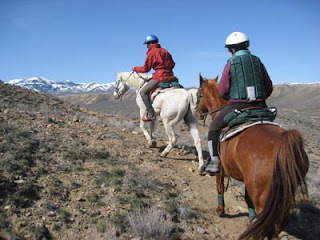 one that had gotten a bit narrow over the winter. Connie had said, "This didn't used to scare me, but now it does!" She took a shovel to widen it the other day. Over the next ridge to Spring Ranch Road, where the ranchers had politely hauled out some water for us to drink in three big tanks. 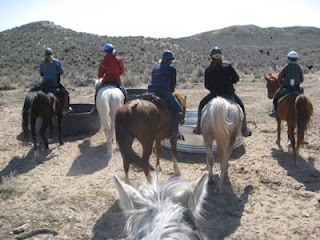 (It's really for the cows, turned out to graze on the spring grass). Across now-flowing Hart Creek 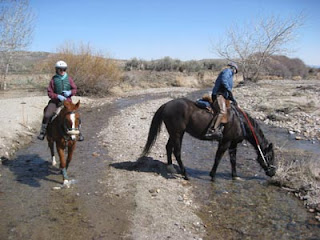 - which was bone dry a week ago - across Triangle Road to Browns Creek drainage. There's some nice washes over there that keep you out of the wind if it's a nasty day, and this nice trail is part of some of the Owyhee rides.

Except for placid Mac, the rest of the horses were all FULL OF BEANS. They took this as a serious competition. Nance's two horses Jazzbo and Quinn are still living on snow on their north-facing slopes outside of Boise, so they were hot to get out and going in the desert. Karen's horse Gil can get a bit excited in a crowd, and there are certain horses he does not take a shine to. Like Jazzbo. I put Quickie as the buffer between them, which she wasn't all that happy about, but she tolerated it for the first part the ride.

And you know how it goes when you're at the tail end of a long string of horses trotting along - whereas the first horse in the line is trotting along at a steady pace, the rest of the string is like an accordion, with the tail-ender getting it worst: trot, brake, trot, stop, start, trot, stop. I kept Quickie back so we could move along at a steady pace... but she sure didn't like that, because as most horses, she'd rather be right on the heels of the horse in front of her. Of course she doesn't like anyone on HER butt though.

Finneas was having his own problems - worrying about looking good for Quickie and keeping everyone away from her, whereas Quickie just wanted to go in front and go much faster. Finneas got to lead a while which made him temporarily happy, especially when Quickie was right behind him.

After 10 miles Quickie had had enough of being a buffer and tail-ender, and threatened to throw in a buck or two, especially when we went down little dips. Don't let her get her head down! She'd done her share of buffer duty, so I let her go up front the last few miles. I had my hands full keeping her strong, big, fast, natural Orlov trot down to a moderate 10 mph. 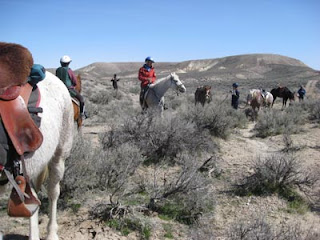 When we returned after our 14 mile workout, the horses all got some food and a good roll in the sand. Looks like the trails and horses are shaping up nicely for the first real spring Owyhee endurance ride, the April 19 Tough Sucker.

See you here!
Posted by The Equestrian Vagabond at 10:24 PM