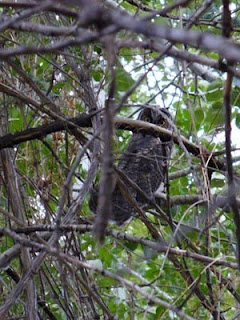 A Big Storm was supposed to come in - and the weather did say 90% chance of rain, so we might actually get a little - so, not so pleasant to ride (not that we're wimps or anything). And, Stormy can only take so much smooching all day long. So, what to do?

I went birding! Remember the captive riding bird biologist? Karen asked me to come check out golden eagle nests with her (by vehicle), to see if eagles have started nesting - laying and incubating eggs. She's been studying them for many years around here, so she knows where all the territories and nests are. All the nests we looked at are on cliffs high above either the Snake River or Sinker Creek. You can see the nests across the rim from you, but you don't really want to stick your neck out over the 1000' rim you're standing on, unless you are a daredevil, which we are not.

In one territory where this pair has been consistently nesting the last few years in one of two nests, and where Karen really expected to see eagles on one of them - there was no sign of eagles, or any activity - "decorating" the nests, or sprucing them up, with fresh greens.

Next territory had about 9 different nests; Karen found the two that have been used the last few years, and they looked like they might have been decorated. Now, looking at eagles nests is not that easy - even with binoculars they are often far away, and often camouflaged well in the cliff, especially if they haven't been used for a few years. You can't always see if a bird is sitting in a nest unless you can get a good position or angle from above it, and even if you do, the bird is often well camouflaged in the nest itself - and you better have a powerful spotting scope on a tripod. Often the birds will sit low down in the nest for hours, so if you don't see any movement, you might think it's empty. Last year when we rode out with Karen to check on a nest, three of us took turns staring through the spotting scope for 30 minutes before one of us realized that the rock we thought we were seeing was actually the head of an eagle on the nest - one of us finally caught the eye blinking.

We didn't have a good angle on the decorated nests, but later we saw 2 golden eagles soaring above the territory - an indication they are not yet (or maybe won't be) nesting. She'll come back out in another week or two to check.

It was a great bird day all around. We saw approximately 9 eagle nests, 2 golden eagles, 1 rough-legged hawk (which hovered very near us in the strong wind, then sat on a pole, giving us a great view), 2 turkey vultures (just saw the first ones of this season 2 days ago), 1 prairie falcon (they should be getting close to nesting), 1 red-tailed hawk, 1 northern harrier. And the real treat was a stop by a long-eared owl roost, where they congregate to sleep during the day. Karen had seen 8 at one time in there; today we stopped and walked through the wash, and didn't see any. We saw lots of whitewash and lots of pellets in the thick trees, but no owls - until we backtracked. Then we flushed 4 of them. Which was hard to believe, as I thought we'd scanned the trees we passed very closely, but obviously we'd walked right past them. Amazingly camouflaged they are.

It was a good way to pass the day if one wasn't on horseback.
Posted by The Equestrian Vagabond at 7:39 PM