In the morning I met Coby and Jordi in a cafe next door (I had another try at an iced coffee... another tease!). I asked Jordi questions about his horses and his endurance riding through Coby, and he filled in some of the blanks that Coby and I hadn't talked about yesterday.

El Bagual, the name of Jordi's little farm, is an old Argentinian word for wild horse breaker – Coby chose the name because it fits with what Jordi does best – taming wild horses. Jordi is one of those Natural Horsemen that have a brilliant way with horses, but doesn't brag about his prowess. Jordi does what he does because he enjoys it, not for show. His business comes by word of mouth, and he has plenty to keep him busy. He's got 5 endurance horses; the rest are stallions, mares and foals, and other clients' horses that need handling or breaking. 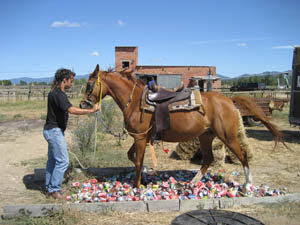 Jordi Comellas is not a big name in endurance racing, and it's because that's not one of his goals at the moment. His work, his passion, is breaking, schooling, and taming wild horses, and building a strong, slow foundation of work underneath endurance horses. He doesn't like to start ('break') his horses till they are 5 or 6, and he believes very strongly in progressing slowly: much of that training is walking – months, even years, of walking and slow training rides, never racing. With an endurance horse he will do lots of 20 km and 40 km rides, and lots of 60 km rides with a horse before ever considering doing a 90 km or 120 km ride. And he ends up selling the horses before they get to the 120's anyway. Family tragedies interrupted a lot of training last year, but he's back on track with his training and going to endurance rides with his horses.

And, Jordi said in Spanish, and I understood, he really would like to ride Tevis in America!

After our coffee, Coby said I'd go off with Jordi for the day while she went about her own business. Oh dear, I thought, with my whole Spanish vocabulary of about 100 words, it is going to make for a silent day. But, off with Jordi I went!

And Jordi and I started talking horses during the drive to his farm – and I could not believe it, but I understood him. Either I know a lot more Spanish than I think I do, or, it's the language of horses, (with a little bit of sign language), that makes understanding this foreign language possible. He spoke Spanish to me, not Catalon, (otherwise, forget it!) and he had to speak slowly, and repeat some things, but somehow, I instinctively pulled these words and phrases from somewhere out of the blue, and understood everything he was saying.

Jordi's been in this area for 6 yrs but doesn't like it for training – it's too flat, being right by the sea. There were some modest mountains, right there in front of us, but they are off-limits, no horses, no motorbikes. Flat ground doesn't build up a horse's heart. He can haul to mountains further away for serious training when he has to. The walking uphill and downhill builds up their muscles, teaches them to use their whole body. It's also good for their mind, and mental schooling can be as important as physical conditioning. He isn't a fan of the flat racing in the Middle East, either – as far as he can tell, there's no challenge for the rider; you don't have to know your horse at all. Mountain rides are the real endurance rides - a challenge for the horse, the rider, and the two as a team.

When we arrived at El Bagual, with its humble sign half hidden behind a raised irrigation canal, and its humble barn (some might say dilapidated or spartan, but I would say antiquated, comfortable, and character-ful), Jordi said, “It's not grand, like Stephan Chazel's or Bernat Casals' place, but it's mine.” The horses looked content, plenty of room to move around, plenty of hay to eat, and that's the important thing.

First thing, I got to watch Jordi working with unbroke horses. The first one was a young mare broke to wearing saddle and bridle, and the second was a wilder gelding that had had just a minimum of handling. With both he used ropes, feed sacks, and a plastic bag on a whip to 'sack out' the horses, get them used to standing and accepting the touch and feel and noise. He touched and petted them all over, jumped around then and on them until they relaxed; he used a lunge line, and used driving ropes to get them to move forward, turn, and learn to give to pressure. 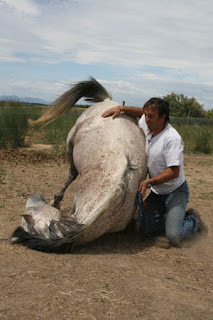 The key, he says, is to release immediately when the horse responds to pressure. And to know when to stop working with the horse – end on a good note, otherwise there is the risk of hurting the horse, going backward in your training instead of progressing forward. He really prefers best to work with horses who have never been handled – they don't already have any bad habits, taught by humans, that need unlearning first.

For each horse, during the work session, after he had it responding well to pressure – moving away from him and coming forward - he took the horse out into the yard and led it over 'Can Alley' – a little path filled with aluminum cans. You can imagine how noisy and scary walking over cans might be for a horse. “Primera vez,” said Jordi – first time for each of them. He led the way and they willingly followed him, walking over the cans, looking at their feet closely, but with a minimum of fright.

With the gelding, who was much less broke – Jordi wore gloves out for this one - after time in the round pen and walking over cans, Jordi said he'd try to load him in the 2-horse trailer – only the second time in his life the horse had been in one. The first time was when he was a youngster, and he was driven into one to get to Jordi's place. Using the techniques he'd just used in the round pen – pressure on and instant release when he got a response, driving and releasing, within just a few minutes he got the horse into the trailer. And it was a noisy, scary trailer – it wasn't attached to a vehicle, so the trailer was rocking forward and backward depending on where the horse's weight was centered.

Jordi led him out, then back in again; and the second time, the horse walked right in (trailer rocking), and stood there freely, facing forward, and eating hay contentedly. It's like magic watching some of the things good horsemen do when they are working with horses... but it's really just common sense when you think about it. And when it's done right, and it looks like magic, it looks easy... but not everybody can do it!

We had planned to go for a ride, but, as happens on horse farms, plans change, and some clients showed up. Jordi saddled a gray horse for the young boy and gave him lessons, while he sent me to fetch and saddle another chestnut horse, Cinnamon – one that did the Hipic Can Vivet ride 2 days ago. I rode around the little farm, then Jordi sent me out on the road on my own. I didn't want to go too far – didn't want the responsibility of taking a stranger's horse out alone!

Though you can't tell a whole lot about a horse at just a walk and a short trot, I could still tell that this was an awfully nice horse. Coby had been saying that one of these days, Jordi needs to keep at least one of his good horses and start competing with it in 120 km rides. When I got back, I told them both, “This is the one you need to keep!” And Jordi must have been thinking the same thing... “En Enero (January) noventa kilometros (90 km). En Marzo (March), ciento veinte kilometros! (120 km).” His eyes lit up as he said this, and he repeated this plan to me a couple of times over the day. 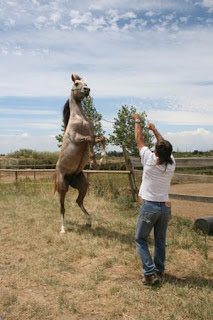 Jordi got on my horse Cinnamon and led the boy around a bit on the gray horse at a trot; then he demonstrated for all of us Cinnamon's athleticism, loping and galloping, loping and sprinting. He sat well on a horse, looked like a natural part of it. I said, “He looks like the Man from Snowy River!” The Spanish Man from Bahia de Roses – watch for him and Cinnamon on a 120 km ride in Spain in March!
Posted by The Equestrian Vagabond at 9:35 AM