Roses on the Mediterranean

ROSES ON THE MEDITERRANEAN
Monday July 9 2007

In the very northeast corner of Spain, on the Bahia de Roses (Bay of Roses) on the Mediterranean, very near the border with France, is a little unpretentious farm called El Bagual 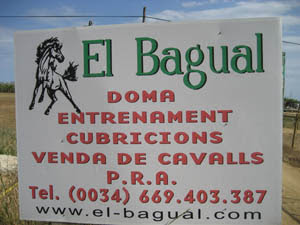 . There are about 2 dozen horses in outdoor electric-fenced pens, a round pen, a couple of horse trailers, and a crumbling antique brick barn with a few stalls, and egg-laying chickens, and one very ecstatic year-old boxer puppy named Grispetta (Popcorn).

On the fence boards of this round pen you might see some ropes, lunge lines, carrot stick (you know, the Pat Parelli whip), plastic bag on a whip, and a pair of gloves, and you might see a Spanish endurance rider and natural horseman named Jordi Comellas leading a rather wild-eyed unbroke horse into the pen to work.

I'd come to El Bagual in the usual way of my travels, with strangers: Jordi's parents, Ramon and Annamaria, who didn't know me from Adam, picked me up in Berga after Bernat arranged the ride and dropped me off with them (and it was very hard leaving Bernat and Neus, and his parents Valentine and Neus, who made my stay so welcoming and lovely). Jordi's parents didn't speak a word of English, and I quickly exhausted the little Spanish I knew talking with them. We spent most of the ride looking at each other and smiling and giggling. I understood they were taking me to Jordi and his partner Coby's place (Bernat had introduced me to them at the Hipic Can Vivet yesterday)... or somewhere thereabouts. I really wasn't sure exactly where I was going, and I wasn't too worried about it. Somewhere else in Spain to see more horse people was good enough for me!

After about 2 hours of driving, Ramon tried to explain something to me, but I wasn't getting all of the words – something about they lived in Vic (which we'd passed through), Coby and Jordi lived in M---, and 1 hour for something, and 10 minutes for something else... but I just didn't have all the words in my Spanish vocabulary to get quite what they were saying. So we just laughed. After about ten minutes we pulled into a “stop” off the highway (gas and restaurant), and there, getting out of another car, was Coby. “OH!” I said, “NOW I know what you were saying!” We all laughed. We all had a drink before getting back on the road, Jordi's parents back to Vic and home, and me with Coby toward Roses.

Coby is from the Netherlands, and speaks 7 languages. “How on earth,” I asked, having been a Uno-lingual person all my life, much to my chagrin, “does someone speak SEVEN languages?” Well in the Netherlands, you grow up speaking Dutch, French, and German; and she picked up English, then she went to Italy and learned Italian, and then came to Spain and learned Catalon, and Spanish was not so much more to learn. And she said she enjoyed studying Russian, but she wasn't even counting that as a language. “Besides,” she says, “I like to talk! I just go somewhere and start talking! Jordi sometimes asks me if I EVER shut up! And unfortunately, our kid Joel is taking after me!” She added quite gleefully.

On our hour trip to Roses, she talked and talked and answered her phone in between, and had me in stitches with comical stories. We drove from thick green forests down toward the coast, in heavy gray clouds. I hadn't realized how much I'd missed clouds and rain till I was in them. Coby had arranged for a hotel for me in Roses on the bay, and said Jordi would come pick me up in the morning, take me to his farm, talk horses with me... though Jordi did not speak any English. She said she'd be around, in person or by phone, for interpreting.

I had a little time at night 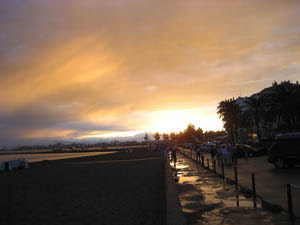 to walk through the touristy town past many beach clothing stores, restaurants, and gelato places, and the boardwalk along the beach. The sunset was quite spectacular – as most Mediterranean sunsets are – the rain clouds and sun clashing on the horizon and painting the near hills and the far mountains different colors, and of course, there was a rainbow for dessert! The restaurants were crowded, and many people were out walking, late into the night. This strolling about, sitting in restaurants late into the evening is a fine European pastime. 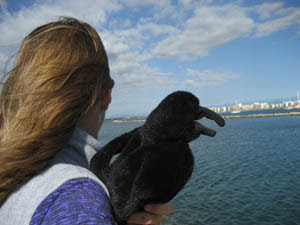 Now, I must say a word about European hotels I've encountered so far, in Italy, France, and Spain: NO AIR! No air conditioning, no fans (though the lovely little Hotel Pallotta in Assisi had a fan for me), and sometimes you couldn't open the windows, they were bolted shut! And it wasn't for the crime. Surely it can't be just me who likes, craves, fresh air, cool air. Many of the little villages I've passed through in Spain and France have their shutters tightly closed – it looks like whole towns are empty and abandoned, though you can see a fresh flower pot outside on a balcony, or a few laundry items out to dry, so you know people live there – but shutter windows and doors are tightly closed, all day, into the evenings. Maybe it's against the heat, but even when the sun doesn't hit the windows, whole towns are shuttered. I guess that's what I get – a craving for cool fresh air wherever I go - for spending most of my life working outdoors and the last 10 years living in and appreciating the fresh air of the mountains in summers and deserts in winters!

And, the cafe con leche con hielo (coffee with milk with ice) is a TEASE! There's a little tradition, here in Catalonia at least, of this drink – hot strong coffee, with milk if you ask in a cup, served with a glass with ice cubes in it. You stir your sugar (if you want it) into the hot coffee, then dump the hot coffee into the glass with ice. Served properly, (i.e. with enough ice), your coffee becomes cold, and scrumptious (says one who always craves iced drinks).

Well. I'd had a great one of these with Bernat's family on the way home after the Hipic Can Vivet ride, and I ordered one of these here in the evening, and I got two, count-em, TWO ice cubes, which promptly melted in the very hot coffee, cooling it off very little. What can you do, but just try to learn to like hot stuffy rooms and not-cold drinks, and laugh! And follow it up with a big serving of gelato. :)
Posted by The Equestrian Vagabond at 9:40 AM