Today I was going along with Bernat and a load of people to a local ride 1 1/2 hours away, the 3rd Raid (Ride) Hipic Can Vivet, at the Club Hipic Centelles, where a 20 km, 40 km, and 60 km were being held. The Casal family (and the three youngsters Bernat was escorting) would ride the 40 km. 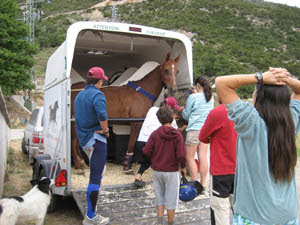 (“only 8 minutes late!”), and down at the bottom of the hill brother Uri and dad Valentine were merging onto the highway with their van and 2 horses. Bernat's crew, two girls and 2 boys (and Peter, who was one of the riders) followed, and we met up with another carload of people on the way. As we passed through Centelles, and turned off the small road onto the tinier, narrower road, one lane only, leading the 200 metres to the basecamp, which looked packed and chaotic, we met a horse van, 300 crew cars heading out, and another horse van. I was so scared we were going to scrape sides, because there was just no room to pull off the road, I had to employ my Sri Lankan Drive-Calming Technique: look out your side window so you don't see what your driver is going to crash into!

Somehow we squeezed by without touching, and, still dodging oncoming crew cars, we pulled into the indeed chaotic ride base. They were trying a new method for this ride: All the distances, 20, 40, and 60 km, could vet in any time between 9 and 10 AM, and could start any time between 9:30 and 10:30 AM. One of the reasons for this, said Bernat, was that too many people tend to run their horses as fast as they can at the beginning, and, since there is a speed limit, usually of around 15 km/hr (you cant' finish faster than this), so many people would pull up short of the finish line and hide and wait for the correct time to finish. And, with so many people racing in a group, more people tended to hurt their horses racing together. Bernat also thought this might be a better situation for teaching young horses; they get used to all the commotion of horses coming and going at all times, so they don't get so hyped up starting in a big group, many of which are acting goofy because they take off so fast.

As we pulled in at 9 AM, riders were already going out to start their rides, either alone or in groups; the vet ring was busy with horses vetting in, and cars were racing out of camp for crew points, and people were still arriving with their horse vans. It was like arriving in the middle of an endurance ride – people, horses, cars, coming and going, horses in and out of the vet gate – only it was the beginning of the ride.

Bernat parked and his crew unloaded his horses; Uri parked in another area and he and his dad Valentine unloaded theirs. Some of the crew, including mom Neus, took care of the paperwork for all 5 horses (which took quite a while), while the rest of the crew grazed the horses, and set up the saddles and water buckets in the crewing area. Eventually the horse passports returned, and the 5 horses vetted in for the ride. Bernat and the crew saddled them up, and off went Uri and his father Valentine, and shortly after (at 10:12 AM), Bernat (on a gray gelding) and his herd, a young girl (riding a chestnut mare of Bernat's), Peter (one of Bernat's riders, on another chestnut mare of Bernat's), and young Paul (brother of one of the little boys at the Vilaformiu camp, riding his father Salvador's horse).

Then it was time to crew! No hanging out and relaxing in basecamp here! Jump in a car with strangers (friends of Salvador's) and race down the narrow winding roads with dozens of other cars, passing by a castle on a hill, to the first crew point in a parking lot, where dozens of other cars were already parked and water bottles and jugs set up. We jumped out and grabbed spots to set up – water containers carried to an open spot and set on the ground, ready to grab and pass off to riders... and then we waited for our riders to come through. This stop must have been at the end of a long hard climb, and most of the riders must have been racing up it, because nearly every horse I saw was panting like a dog when it got to the top. Few of those riders let their horses rest and catch their breaths... they slowed to grab water and dump it on their horses, and they were off again at a trot or canter.

When Bernat's group rode up the hill, our crew swarmed onto them with water bottles, and they stopped a while, giving the horses a break, giving them plenty of water to drink, 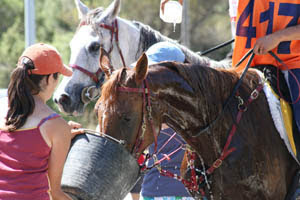 and pouring lots of water on them – it was a very warm day, in the 80's already. Bernat doesn't bring his horses to the shorter distance rides to race – to him they are strictly training rides, to get a horse used to everything – horses in camp, on the trail, at crew points and vet checks. On the trail, Bernat's horses can go, go, go, concentrate on moving forward, but at the crew points is where the horse can relax, physically and mentally, catch his breath, drink, eat grass, and not worry about catching other horses that are coming into or going out of the crew points. Back on the trail, it's all business – and easier because the horse has learned to take a little break.

Once the Casal gang moved back out onto the trail (road), our 3 cars of people refilled water jugs, loaded them back in the cars, jumped in, and raced (!) down the winding roads to the next stop – not too far away by car, but plenty of kilometers by trail, because once we were set up, we waited a while for them to appear again.

And here they came in a group, trotting down the paved road, stopping for a good drink and dousing with water – some of the riders dousing themselves too, because it was warm for everybody. Bernat's group was toward the back of all the riders, so while we were waiting to crew, and crewing, there were always other crews packing up and leaving, and other cars driving by, and motorcycles, and quads, and bicyclists passing.

When our riders left, here we go again, packing up, jumping back in the car, and racing back along the narrow winding roads, underneath the castle, back to camp to wait for our riders to come in off the first loop. We had plenty of time to get there before the horses, but I'm beginning to think that RACING along in your car is part of the fun.

Base camp was really lively now, horses of all distance coming and going, vets in the ring very busy, water flying everywhere to cool horses and people down, cars racing in and out of camp, cars trying to drive through the busy crewing areas so they could get on the road and race to their riders' next crew points. The barbecue man was busy, as was the stand selling sandwiches, cool soft drinks and water and beer on tap. Our horses vetted through fine, and had a 50 minute hold. Valentine told me, “I think the horse is better than me!” as he hobbled by with his horse. There was a good breeze blowing through camp, which saved everybody from baking.

Once they resaddled and we sent them off on the trail again, here we went again, jumping in our cars and racing to the next crew point with dozens of other cars, the narrower the road (1-lane) the better, the windier the road the better, the faster the driving the better, the dustier the roads the better! Sitting in the back seat was like a roller coaster ride, wheeee! We got set up at the crew stop, and waited, and waited, every car passing us kicking up a fine breath of dust that continuously settled over everything.

Our horses and riders came through, looking hot (the riders moreso, maybe), and they took a good water break here. Then we loaded up everything, jumped back into the car, and raced back to basecamp – that was our last crew point. In camp we waited quite a while for our riders to come in and finish. First across came Paul, Peter, and the young girl, and a few minutes later, Valentine and his two sons Bernat and Uri came across the line. Valentine had wanted to race in, but Bernat told him, "No way! You won't be able to stop your horse!" Bernat and Uri let dad cross the line first. 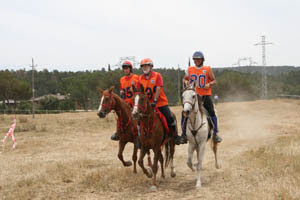 Valentine slowly slithered off his horse, held by his crew, landed gingerly on the ground, then hobbled after his horse. He showed me a wounded ankle – his horse had slipped in a hole on a narrow part of the trail, fallen down, and pitched Valentine to the ground, then stepped on him. Ouch! But, being an endurance rider, he got back on, and finished the race – with a smile on his face I might add. (Back home at night, he found his side injured also, and he went to the hospital for a check and a tetanus shot.)

Bernat was very pleased with all his horses, and he spent the drive home – and much of the rest of the evening, reflecting on his horses' performances, what might be next for them, what he might have done better for them, and what he might try next time.

Bernat enjoys competing in the longer rides, but he also enjoys these local training rides - partly because he enjoys the training and schooling of the horses, and partly because he knows everybody! Everywhere he waved to people, said hello, stopped and talked to them. Every van we passed on the road he honked at and told me who they were. It was one big endurance family getting together and having a good day's ride - great way to spend a Sunday in Spain!
Posted by The Equestrian Vagabond at 9:51 AM