Put Out to Pasture 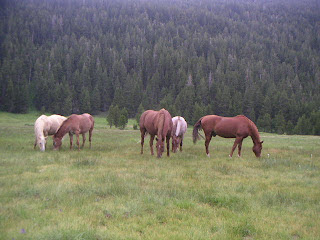 We took the last two Forest Service horses to their winter pasture today. Zak and Red and Brenda were already there; we kept Tom and Paiute around here just in case any more last-minute range riding needed to be done. But we pulled their shoes Monday and hauled them off today; their season is over.
My season is over. Was it my last one here? Shrinking budgets, shorter seasons I can no longer survive on, never a guarantee of work from year to year - was this my last season hiking trails here, seeing the Sawtooths every day, riding my Forest Service horses, packing them into Piute Cabin? And that’s the worst - is it the last time I will see these horses?
I move around so much I don’t ever say goodbye to people or places, because I usually return. But the horses – that’s something different. I’ve known these guys for 9 years, and we’ve been through some good and not so great times together. Like these times:

***
Margaret and I rode Tom and Red out from Piute cabin after a snowstorm, over 12” of snow, where you could barely see the trail, and sometimes you couldn’t at all, but the horses knew the way.

Once on a pack trip, in the middle of a string, Zak’s load shifted to one side and he freaked out, reared up and broke loose, flipped over backwards, and tumbled back end over end with his load 40 feet down a 50* slope into a creek, miraculously landing in the one spot that didn’t kill him or even break anything (except all the groceries in his ice chests). And getting him out of there was HELL.

I survived my first 8-day solo pack trip with Piute, Zak and Brenda, and they did too!

I chased Paiute for 30 minutes straight one day before I caught him - he was so tired he couldn’t go another step, because after 10 minutes, I kept him running, and he never did that again (that year, anyway). Of course, once he’s cornered, he politely and enthusiastically lowers his head into the halter.

Not too many summers ago I did some leg work with people to rescue these horses in case they were suddenly hauled off to auction.

Last summer I had terrible troubles with Brenda the mule’s saddle pad slipping out from under her pack saddle (always with a heavy load, of course), and on every pack trip would have to stop every two hours, tie up the string, take Brenda out of the string and tie her up, and unload and reload her. Brenda was SO tolerant, even the time I had to struggle terribly to lift 4 40-lb cans from out of her panniers (and if you have not tried lifting 1/3 of your body weight from chest-height to over your head, try it once), constantly accidentally kicking her, falling on her, dropping the cans back in the panniers, etc, and she just stood there. And after resaddling her, I had to get the cans back in the panniers. (Then try lifting 1/3 of your body weight from the ground to over your head and trying to fit the cans in panniers that won’t stay open.) Cursing helps in situations like these. Brenda still just stood there patiently.

Turning the horses out at their beloved Piute Meadows after an absence of a year or two years was one of their (and my) best moments ever.

These are my horses - we’re buddies.

At least with this new awesome horse-friendly district ranger I don’t have to worry about my horses not being cared for properly or them being gotten rid of (read: auction, and you know what happens to most horses that go to the auction). But - who knows them best? Who knows the order they prefer to be in a trailer or in a pack string? Who knows the best way to catch Paiute when he doesn’t want to be caught? Who can just give him that look that makes him stop? Who knows the way they will each react in a certain situation? Who knows that Zak’s mane tangles in exactly the same spot every year and you have to remove the knots gently because he doesn’t like you yanking on his mane? Who knows that though Paiute pretends to be aloof, he secretly likes to be hugged as long as nobody else is around to see? Who else knows that when Paiute turns off a trail you are riding, it’s not because he’s being cantankerous, but because he’s turning off where the trail crew camped years ago or where ranger Tim stashed a shovel years ago?

I’ve been stuffing Paiute and Tom with carrots these last few days, telling them I may not be back. I know they’ll probably be fine without me, but what will they think if I don’t show up next year? What if they think I abandoned them?
Posted by The Equestrian Vagabond at 8:10 AM