New Neighbors on the Crick 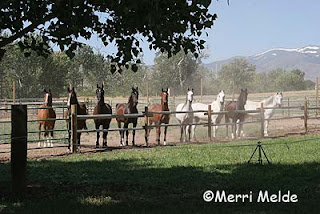 In hindsight, the obvious clues were there as to who was moving in.

1). I barged in the barn one night (this is a storage barn, not a horse barn), flipping on the lights as I strode in, arriving inside the second door just as the lights were flickering on. Startled from the cat food (around which is a half-set-up wire cage, to keep sneaky Luna the dog out, but that the cats can easily access), a rather loud and large, and, I thought, unreasonable ruckus occurred as the creature stumbled and crashed out the open window. I have glimpsed a stray cat before, so I assumed that's what it was.

2). The barn again. Where the cat food is. I have a small oven that I bake my Plumpie Ponies in, stored in a box, which was on top of 3 stacked Walmart tubs. It was solidly set, where nothing but an earthquake would knock it down. But it was knocked down to the ground one morning - and we didn't have an earthquake.

3). The barn again. Where the cat food is. We have buckets of ride ribbons stacked atop each other. Also solid, where nothing but an earthquake, or fighting dogs (we don't have any), or possibly fighting cats (we have cats that fight, but they really just howl at each other then creep away), would have knocked over. But several ribbon buckets were scattered on the ground, busted open, ribbons spilling out. And we didn't have an earthquake or dog or cat fight.

4). Animal poop on the top round fence rail. What the - ? It certainly wasn't a bird. Sure didn't look like cat poop, and anyway what cat poops on a fence rail??? Dogs and coyotes will poop on bushes, and, ok, maybe a log, but - on a top fence rail??? We just sort of ignored that, because we couldn't figure it out. 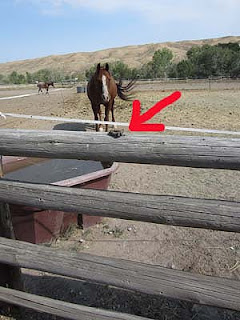 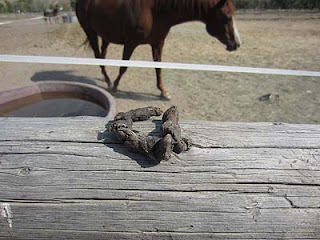 5). The barn again. Now this is bizarre! I had a bag of clothes bound for goodwill, tied in a white plastic bag. I put it in the barn a few days, again, solidly on top of 3 stacked Walmart tubs. Nothing but an earthquake would have knocked it down. It was just full of clothes. And one morning I walked in the barn, and there was the bag on the ground, with - get this - 2 neat, careful holes chewed in either bottom side of the bag, with items of clothing appearing to be partially pulled out of the holes. A whole arm of a jacket was pulled out one hole, which appeared to get stopped up when the end of the arm got bigger and more couldn't come out. A whole leg of a pair of tights was pulled out the other hole, appearing to get stopped up only when the butt-part and other leg were tangled in a knot. The clothes themselves were not chewed.
What. The. Hell! 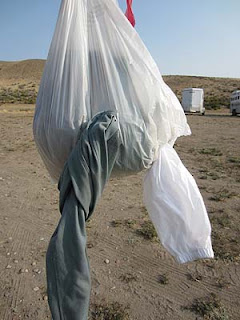 We do have stinkin' packrats in the barn (the war is on again to catch and remove them!), so… I just figured it must have been packrats. They love to collect things in their nests - but - entire pieces of clothing??? They usually chew things up into smaller, nest-decorate-able pieces, like cushion stuffing, insulation. I pictured a packrat taking a big white jacket and a pair of green winter riding tights for a packrat fashion runway show. Because - what else would have done that, and why?

6). The horses have been acting a little funny off and on. I tend to blame that on a cougar passing through, but they aren't acting real Cougar Spooked, just a little funny. Last night Dudley was eating his hay when he whirled away and ran a few strides away, turning to stare at the crick. Then he walked back and resumed eating.

7). There was the night a couple weeks ago, where Jovi Dog encountered a raccoon up at Connie's place. A raccoon! In the 8 years I've been here, I've never seen a raccoon. Never knew we had any.

8). Tracks this morning in the soft moon dust on the driveway put all the clues together. We have raccoons! 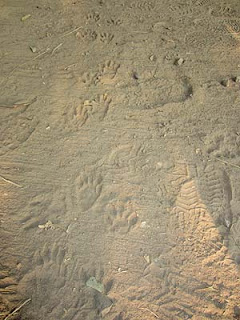 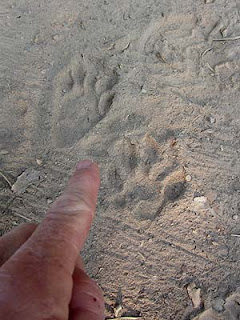 Posted by The Equestrian Vagabond at 3:58 PM