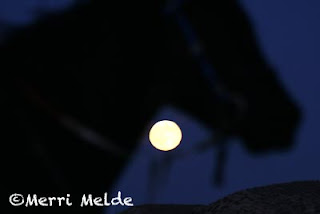 I sit bolt upright in the dark, my ear straining to hear through the window over my pounding heart. It’s cool and windy, spattering raindrops - and a horse is whinnying. That’s not right. And it’s Mufasa whinnying - Mufasa hardly ever whinnies, unless his herd mates across the fence, and/or Dudley, next door, are gone.

I jump out of bed, and as I grab a headlamp I glance at the clock. Of course it’s 1:40 AM, middle of the moonless, cloudy night, when it will be hard to find any horses if they are missing. I think to put on some warm clothes, because this might take a while. please god please god, my heart pounds, let nothing have happened.

Whinny, whinny, I hear Mufasa’s whinny moving around his pen. I step outside in the wind and raindrops, and indeed, Mufasa is galloping around upset. As I get closer with my headlamp, sure enough, I only see his glowing eyeballs. He’s running his north fence back and forth. His herd, the other 8 eyeballs, are nowhere to be seen. Dudley’s eyeballs are nowhere to be seen either, but hopefully he’s across the creek in the trees, by his herd across the back fence.

I duck under the hot fence, which is still standing, and head for where Mufasa’s herd should be. I see nothing but raindrops flying sideways in my headlamp beam. Mufasa keeps insisting the horses are missing in that direction. As I keep walking toward the far end of the pasture - there they are, 8 eyeballs. Have they escaped their pen? Mufasa thinks so; he’s still hollering behind me.

The 8 eyeballs are moving around. Have they escaped, are they outside? I’m talking to them as I’m walking, so they know it’s me. They nicker at me, and start coming my way. Mufasa suddenly stops whinnying, because he can see his herd again.

No, they hadn’t gotten out. They’d just gone to the other end of the pasture to get out of the wind. Just over a slight hill and in the darkness, Mufasa couldn’t see them. Sure, they heard their pal’s rather panicked whinnies, but horses never care about the one left behind, unless it’s them!

I walked back to check on Dudley and the rest of our horses, since I was out there anyway. Yes, Dudley was hanging out in the trees across the creek (also ignoring Mufasa), next to his own herd in the corrals.

As I headed back inside, back to bed. Mufasa’s herd had left him and ignored him again; he was back to whinnying; but now I know nobody’s escaped.

It’s always good when these night escapades end well, though they can disturb a nice sleep.

Posted by The Equestrian Vagabond at 1:15 AM