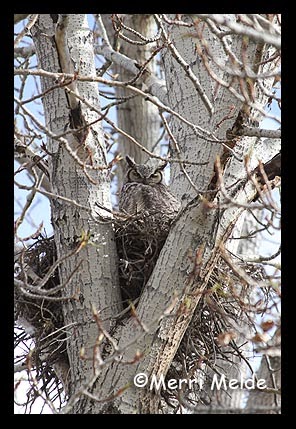 A short jog up Bates Crick, a pair of Ravens brood on their nest. I'm sure it's the same pair that raised 4-5 young in the same nest last year. Their young turned into rowdy raucous ruckus-raisin' gang-bangin' kestrel teasers.

The adult Ravens don't mind me getting close, particularly the male, and I'm almost certain he's The Raven I saved a couple of years ago (story still coming!). One of them will come strut about the horse pasture out front in the mornings, picking up goodies, and dodging wispy Audrey the Terrorist cat who thinks she can assassinate an adult Raven. 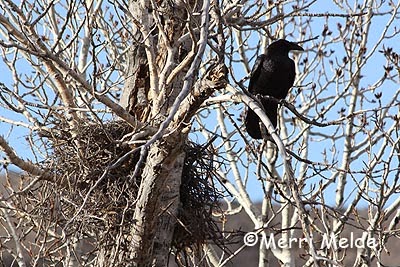 A half mile or so up Pickett Crick, the Great Horned Owl brood has already hatched. This year the owls took over last year's Red-Tailed Hawk nest - much to the angst of the hawks. Owls nest earlier, so they get first choice - in this case a nice protected nest that the red tails were hoping to claim again this year. I can see one owlet on the nest, though they usually lay 2-3 eggs. The adult on the nest is the top photo. This is the owlet - he looks cute-ugly fluffy-fierce at the same time. 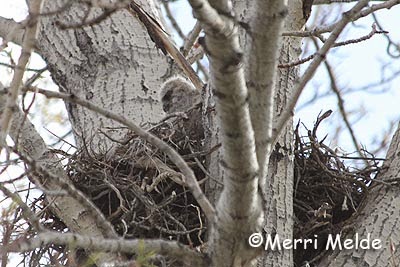 Just 50 yards upstream from the owls are the red tails, in the second choice nest. I can only imagine it rankles, losing your home to your enemies. Here you can just see the female's head to the left, and her tail to the right, sitting low on her nest. 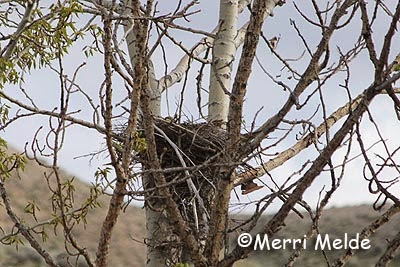 Again the kestrels have mixed in with this mob - they're noisy and obnoxious, and certainly don't like their neighbors, particularly when an owl is sitting in their nest tree. But they decided to re-settle in this racially charged neighborhood anyway.

And then there are the golden eagles. The Bates Crick pair hardly made appearances this winter. In the previous 3 years, I'd see them on the ridge above their nest in December and January and February, and occasionally fluffing up their nest before starting to incubate in March or so. They raised young in 2 of the last 4 years. Not this year. Last time anybody saw them was in January. And they don't have another nest in this territory (eagles often have several nests within their territory, and they often switch around every year). They just disappeared. 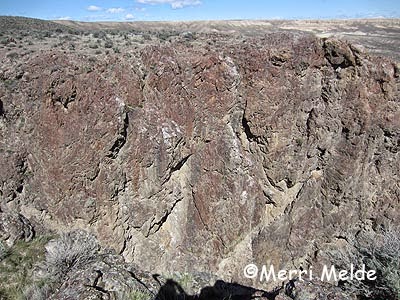 Then there's Hart Crick. I've hiked around here in previous years, once discovering a bunch of eagle nests on one of the cliff faces. Never seen an eagle on any of them - till this year, when I carelessly startled one. I climbed up to the edge of the cliffs here, counted some 4-5 old eagle nests, and admired the view. About to climb back down, I hiked around one more cliff and popped over the edge - and did a startled double take as the golden eagle below me did a startled double take up at me - and flew off nest where she was brooding an egg. 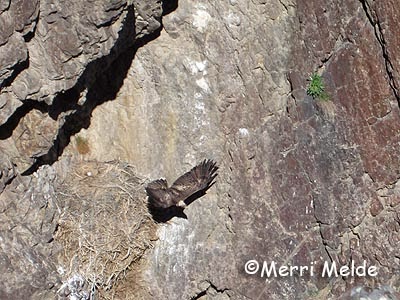 Damn! I didn't mean to scare her off her nest, and had I known she was down there, I'd have never approached so close. Rookie mistake! I quickly retreated as fast as I could, away from the edge and down the far side of the cliff.

It's awesome to have such cool friends in high places - I just hope the eagles and I are still friends!

Posted by The Equestrian Vagabond at 7:38 PM