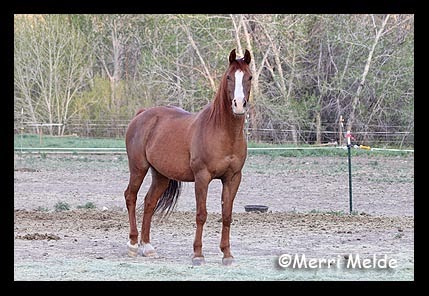 When it's been warm enough this spring to 'play' my banjo with my door open, my bumbling bum-dittying would thoroughly alarm Mufasa in the front pasture. His head would fly up, his ears pin-pricked in my direction, his nostrils flaring widely, and he'd snort that alarm call that some Arabians do so well, alerting the herd that something bad is brewing! Get ready to run away!

I'm embarrassed to say how long I've had my banjo and not learned to play it properly, so I won't say. This year, I decided, I am finally going to learn to really play it. I took my banjo out of its case and left it out, so I'd pick it up every time I walked past it. I started practicing (!!). I started chipping away at some of those songs in my many banjo music books that have piled up and collected dust over the years.

And then I stumbled across the first Old-Time Banjo Clawhammer Camp, in Weiser, Idaho, in April, on a weekend date I had open. You might have heard of Weiser as the home of the annual June National Oldtime Fiddlers’ Contest.

Why learn clawhammer banjo? Well, why not? I signed up for camp, fully prepared to be the worst player in class, and to enjoy the heck out of it anyway.

Ohmigod. It was one of the most amazing experiences, gathering with a group of around 15 banjo players of varying abilities and eclectic backgrounds for a weekend of learning from two extraordinary banjo (as well as several other instruments) players and instructors, Jason Homey and Scott Knickerbocker. 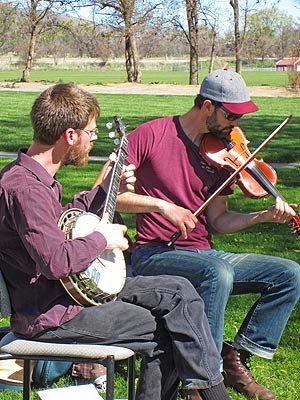 Music theory, hands-on drills, practice, evening concerts by musicians (one night joined by terrific fiddle player Dave Daley) exhibiting seemingly effortless virtuosity, followed by group jams - by Friday night, my brain had already exploded. And we went till Sunday! Sharing music with a group of like-minded people is magical. The great weekend ended with new friends, sore fingers and a load of material to work on.

Just to be on the safe side, though, and not scare the horse herd away, I'll continue to practice with my door closed. 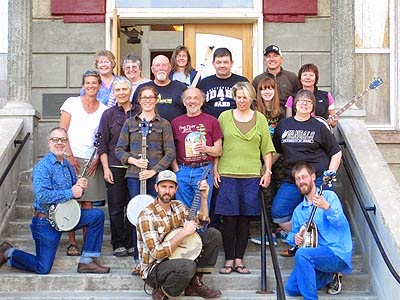 Posted by The Equestrian Vagabond at 7:01 AM