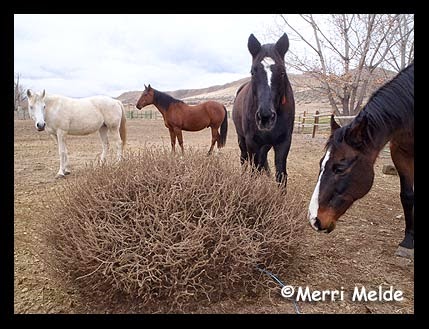 Salsola tragus, aka “Russian Thistle,” or Tumbleweed, is as ubiquitous in the West as barbed wire, and coincidentally the two go together like peanut butter and chocolate.

A native in the Ural Mountains in Russia, the plant seeds snuck over on ships in the late 1800’s from Russia apparently hiding amongst flax seeds, showing up first in South Dakota, and tumbling all over the West thereafter. While “Tumbleweed” aptly describes the entire plant’s existence and planetary purpose, I am also fond of the honorific “Wind witch”.

The tumbleweed is an annual plant that, once it matures, dries out and dies, breaks off at the base of the stem and tumbles away in the wind, efficiently flinging and dispersing its seeds along the way to take root in your soils, and then to ultimately shore up your barbed wire fences. (See Steph’s accurate cartoon depiction of tumbleweeds here)
and my short video of me running the gauntlet of them on an Idaho highway on a windy day!:

Once the desert soil out here is disturbed - that is, as soon as you plow it up thinking you’ll have a fantastic self-sufficient green pasture, or, after a flash flood that scours the sand, or almost immediately after a burnishing wildfire, Russian thistle will be the first plant to move in and take hold. On the plus side, they are pretty - turning maroon in the fall; and if you didn’t have the tumbleweeds, you’d soon have sand dunes developing. But on the downside, they spread, and spread, and are virtually indestructible. One winter I uprooted a whole plot of them and tried to set fire to them - they wouldn’t burn! (Oh, but they will burn quickly when they are dried.) And they are sticker-y as hell.

Before I became more than casually acquainted with tumbleweeds, I thought I’d gather one to send to my artistic sister, who I was sure could make some spectacular work of art out of it. After I collected a handful of painful stickers trying to stuff one in a box, she also found a handful of stickers when she opened the box and tried to remove it; and she decided not to use it. “They are not the cute tumbly little things bouncing across the road. They are very pokey.” Now I know to wear gloves when I have to wrangle with tumbleweeds.

Out of all the tumbleweeds everywhere, this particular one caught my eye. It was a large one, hanging out with a barbed wire fence. It was so impressive, I thought I’d drag it home. The horses were impressed in different ways - not at the tumbleweed, but me, a human, dragging it behind me! 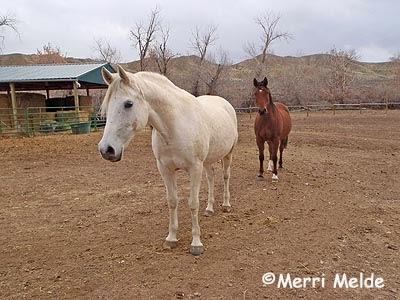 Sunny and Jose are alarmed 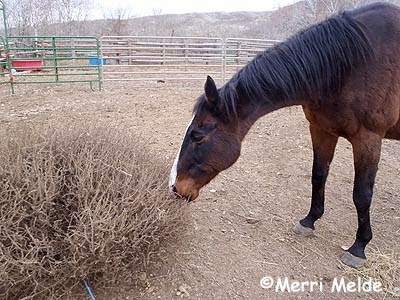 Stormy is not bothered. 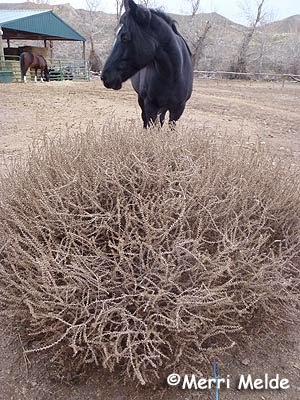 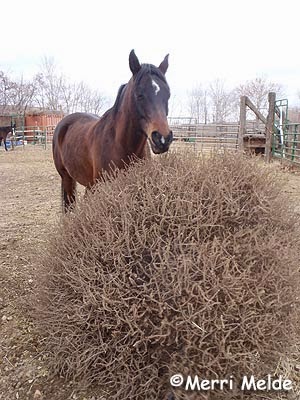 Dudley is (no surprise) hungry! He’s actually picking it up to pull off a prickly stem! 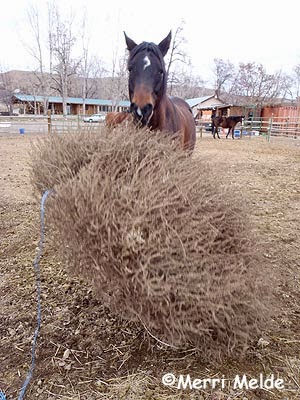 Posted by The Equestrian Vagabond at 6:40 PM