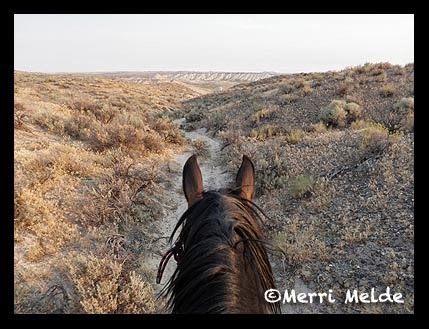 From the brink of obesity to the finish line of an endurance ride, it's been a long (dieting and exercise) trail for Belesemo Dude, aka The Dude, aka Dudley.

When Steph got him back in September of last year (she'd sold him in 2011), he had some bad feet to repair, and he got fat with the herd over the winter. When he started his serious diet and exercise program in February, he just had a hard time letting go of that extra insulation. He's how you define an "EASY KEEPER."

Some days it was hard to get up and go to the gym (trail) every day. We did it anyway. I felt his pain. His sweat stained my half chaps. But slowly, ever so slowly, some of the padding thinned out and firmed down to muscle.

Our main goal was to keep him sound and get him fit; the long-range goal was possibly a 50-mile ride at the 3-day City of Rocks ride August 7-9… but... only one day at a time.

He'd come along well enough that I knew he was fit enough to do at least a 25-mile Limited Distance ride at our backyard Almosta Silver City ride July 19. But a 50? I wasn't sure. Dudley could still lose another 50 pounds or so, and he's not too good in the heat (just like me!). I kept an eye on the weather: if it would be over 90 degrees with no breeze, we'd ride the LD with John and Sunny. If it would be under 90* with a breeze, and company to do the ride with… possibly the 50.

On Friday, the next day's forecast said 88* with a breeze. And then the first rider arrived in camp, and that's when the obvious decision was made. Lynn White, with her horse Roger - Belesemo Moon - would be attempting to complete Roger's first 50 miler (Lynn had pulled rider option on 2 previous attempts). "Third time's the charm," Lynn said. Dudley hadn't done but one 50-miler 6 years ago. Dudley and Roger are cousins (their sires are half brothers). So of course the terribly handsome Dudley and terribly cute Roger - the awesomely cool Belesemo Brothers - would ride the 50 together. 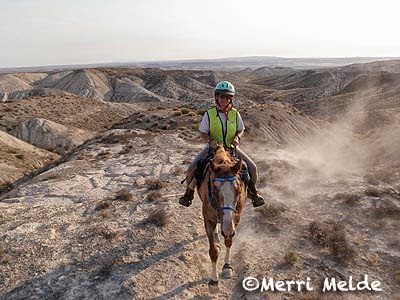 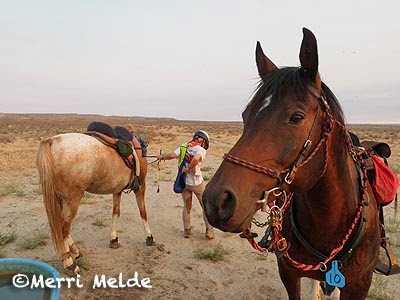 Aside from the lit stick of dynamite beneath me for the first couple of miles, Dudley and Roger marched steadily over the first 25-mile loop, taking turns leading, trotting a steady 7-8 miles an hour. Both Lynn and I rode with heart monitors to keep an eye on our beasts' beating hearts.

Dudley didn't take long to pulse down at the first vet check, standing in the shade and getting hosed with cool water (I hosed myself down too!); it only took a couple of minutes. By the time vet Matt Dredge could check us, Dudley's pulse was 56, and his CRI 56-52. Yay! (He'd pulsed in on Friday at 40, which surprised me!)

Roger took a little longer to pulse down, but they both passed the vet check with mostly A's. (Dudley had a "B" on gut sounds - how is that even possible!?!?) 1 loop down, halfway done; 2 more loops to go! 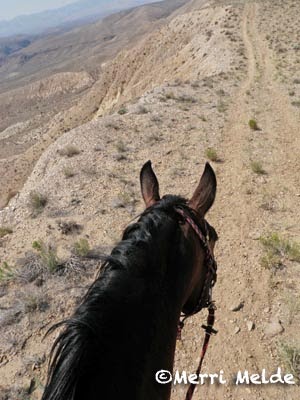 The 12 1/2-mile Rim Trail loop 2 was a shorter but hotter loop, and Dudley took a few more minutes to pulse down at vet check 2, and his CRI was 64-60. But after the final loop 3 (a repeat of the second loop), he pulsed down faster than both loops! His CRI was 56-60, but he got A's on everything, including gut sounds!

"Who's first?" Regina asked us when we rode in to the finish. "We're tying!" I said. "For 11th place?" "Absolutely!" And, unknown to us till later, two more Belesemos finished right ahead of us! Flora Gertsch and Belesema Epic Diva were 9th, and Bethany Sargeant and Belesema Finalia were 10th. I'm pretty sure it was a historic Belesemo Arabians endurance moment. 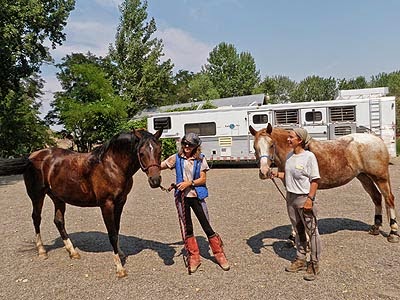 Dudley was pretty proud of himself after he finished (though not near as proud as me). He had two most favorite parts of the endurance ride:

Carrying The Raven on their first endurance ride together. 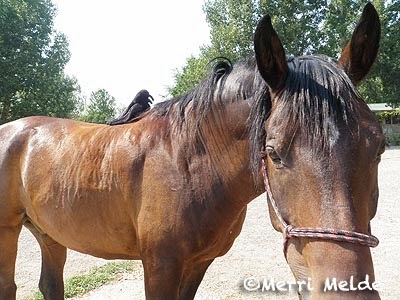 Eating as much as he wanted during and after the ride! 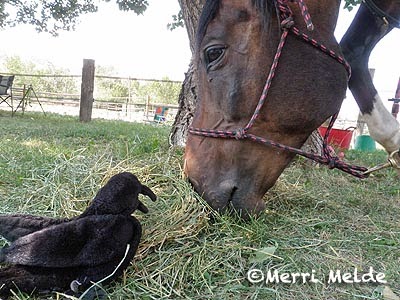 City of Rocks, here we come!

Posted by The Equestrian Vagabond at 7:18 PM