Little Barn On The Prairie 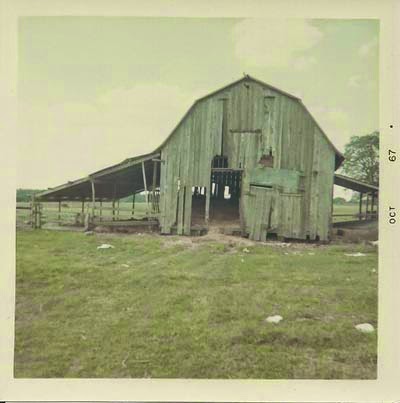 Old barns have a certain mystique about them. You can picture the older era: farm kids in suspenders running around barefoot; you can still hear roosters crowing; you can still smell the horses and cows.

This is the old barn of my great-great grandfather George Wied, who emigrated from Germany in 1854 to an area in south-central Texas. First settlers (we're not talking Native Americans though of course they were already living here and we immigrants squeezed them out) arrived in this area in 1832, but by 1873, the area was mostly populated with German immigrants - good farming stock. (Funny, since I can't grow a plant to save my life.)

Eventually the community took on the name Wied, after the Wied brothers, Henry and August (sons of George), whose land was used for a cotton gin, a store, and a blacksmith shop.

The barn was still standing at least around the 1960's when this photograph was taken (my mom painted a picture of it at some point). While in college I zipped down to Wied, where there wasn't much more than a sign and a few scattered farmhouses, the barn long gone.

These family relics always seem to become more meaningful as you get older, and you wish you could go back and stroll through the barn, listen for the ghosts, pick up an old horseshoe, run your hands over the old plow harness. I have this old photo of my dad and his brothers as kids on a horse, but the horse and my dad and this old barn are long gone, and all that's left is the imagination of memories lost to the passage of time. 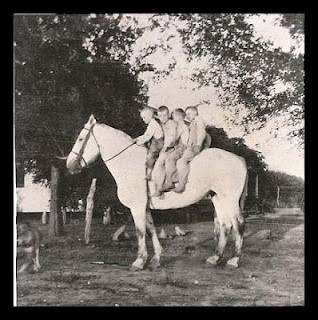 Posted by The Equestrian Vagabond at 3:38 PM