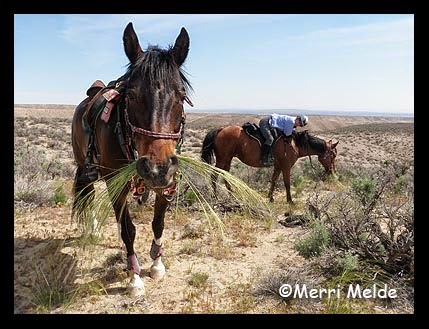 It's SO hard being on a diet. The Dude, who has, shall we say, a little trouble with the flab, is on a restricted diet. He's got a fatty neck crest (which does make for great hugs), plenty of padding on his sides, and fatty dimples around his tail dock. Steph said it looks like her salad bowl. Dudley has no complex about his plus size, but he must lose more weight.

He gets restricted hay soaked in water to remove the sugars (he's insulin resistant), and he doesn't get to eat grass, much to his chagrin.

He works out almost every day - and slowly he's losing the pounds and getting fitter. My goal is to have him not-fat and sound and fit enough to do a 50-mile ride by the end of the season (and if it's sooner - great!).

His reward for working out hard on the trail is stopping for a few bites of grass on the way home. We stop, because he can't eat and chew at the same time - he about falls over.

He knows how to stuff his face. 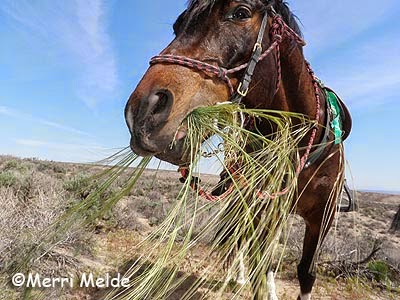 Posted by The Equestrian Vagabond at 5:11 PM