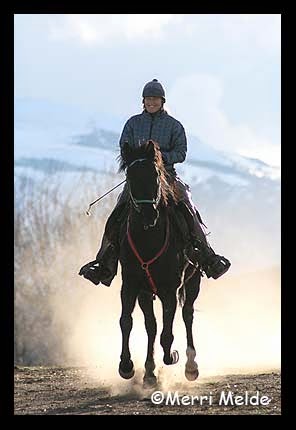 He's very important, and consequently, he's got a HUGE ego. He has opinions on everything (2 years ago, I dubbed him The Opinionator), and he always thinks he's in charge. He doesn't like to be told what to do, because he already knows everything. He always has to be in front (even on a cattle drive), or else he throws a tantrum. He knows he's the Grandson of the Black Stallion (since Connie remembers to tell everybody that about her horse), and if you bust his bubble, he's capable of great embarrassment.

Finneas may be the herd boss, but *I'm* the boss of Finneas, and sometimes he forgets that. *I* am not going to be run over by a thousand pound horse (it hurts to be run over!) just so he can fluff up his ego, so I smacked him and told him "NO!" and backed him up, and continued on with the business of climbing aboard him.

I made him stand still there beneath me for a moment - while Krusty and Jose and the rest of the herd stared at Finneas (and… I'm not sure… possibly they said something to him under their breath, or stuck their tongues out at him). When I said "OK," Finneas bolted for the exit, took off at a fast trot away from the staring eyes. He literally cantered across the arena, across the creek and across the pasture to the far gate until he was out of sight. He was trying to save a little face by charging very purposefully out on his job. 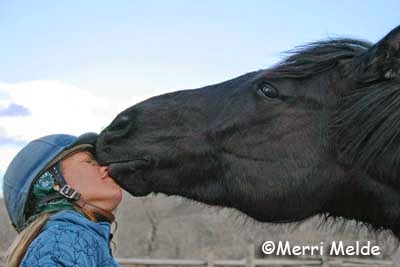 Away from the "Neener neener!" stares of his herdmates, Finneas slowed down and his ego righted; I didn't mention any more about his behavior or humiliation, and we went on to have an excellent ride.

A re-acquaintance recently said to me, "I didn't know horses had such personalities!"

He hasn't met Finneas yet. 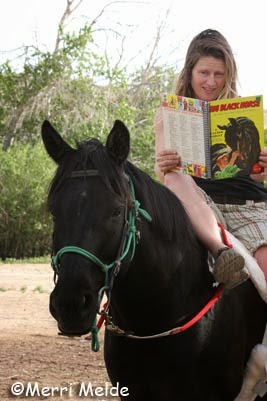 Posted by The Equestrian Vagabond at 8:15 PM