Racehorse Tales - Sunstorm: The Rugged One 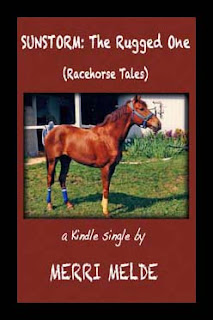 Horses were always coming and going in our claiming barn at Longacres racetrack, and as a groom, I tried not to get too attached to any of them. But I have to admit, from the first moment I laid eyes on Sunstorm, I took a liking to him.
He roared into my life from California in early April. His name fit perfectly his flaming red hide and his stormy temperament. I assumed he was a stallion, but when I looked underneath, there were no tell-tale signs hanging around. "Acts like a stud," I mumbled, as I led him off the van and toward his new stall. He kept his jaws busy, ferociously snapping at nearby arms and fingers attached to the end of his lead rope.
He refused to follow me straight into his stall, and instead pulled me to a stop in the shedrow. He shook his head mightily, in a surely oft-practiced move, artistically causing his thick mane to dance about his muscled neck; and he let out a studdish bellow that shook his entire body. Towering over me, Sunstorm looked me in the eyeballs, I am in charge, here, let's get that straight from the start.
And there you have it – I fell for him…


Above is an excerpt from Sunstorm: The Rugged One, one of my series of Racehorse Tales, available on Amazon/Kindle. These short stories are a tribute to the lovable, (or maybe not-so-lovable), hard-knocking, working class Thoroughbreds that I groomed for so many years on the racetrack.

No two racehorses are created equal. Sunstorm may not have run for a million bucks, but the macho chestnut gelding's attitude and rugged good looks are what I fell for instantly. The cheap claimer left a great indelible mark on my heart in his barn at Longacres racetrack.

Check out Racehorse Tales, and if you enjoy them, please recommend them and consider leaving a review on Amazon!
Posted by The Equestrian Vagabond at 9:00 PM