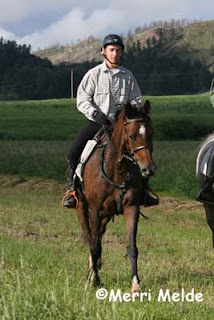 Kyle Gibbon's first endurance ride with Steve Rojek could well have been his last.

Kyle, then 18, had already ridden endurance for 3 years, but he was used to his own paint horse and "little short-moving Arabs." And it had been a long time -  5 months - since his last endurance ride, when Kyle crossed the starting line on the Carolina hundred-mile ride on Steve's horse. Mel was an Arabian/Saddlebred cross, "a huge mover, very different - it was a different saddle, different pace - I was usually more of a conservative rider," Kyle says. "It was fast. And that horse beat me up! Every muscle I had hurt. Even every finger was bruised from the reins. Plus it was cold and raining. I was so glad when he was pulled at 75 miles for lameness, I crawled into the warm horse trailer and fell asleep. I was so sore I couldn't move!"

But Kyle lived to ride again - the very next week - with Steve Rojek, on another of Steve's horses Julio, this time a familiar Arabian, to a first place finish on a 50-mile ride. It was the cementing of a successful working relationship with the Rojeks, which has led Kyle, now 21, to his first ride overseas in the Young Rider/Junior World Endurance Championship in Abu Dhabi on December 10th. "I owe it all to Dinah and Steve. All thanks goes to them." 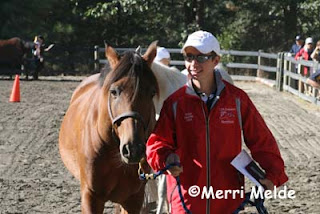 Kyle will be riding Steve's 16-year-old Arabian gelding Misu Koran in the 75-mile Championship in the UAE. Kyle's many years of riding experience since he was a youngster, his interest in jumping and showing, plus his 6 years and 5310 AERC miles of endurance experience will come in handy with Misu Koran.

"He's difficult to ride. He's the most difficult horse we have. He's very anxious and uptight. Some days he is good... but most days he's hot." Kyle has figured a few things out about Misu Koran over their 2 seasons and 9 rides together, which include 6 Top Ten finishes, 3 hundred-mile completions, a Best Condition Award, and a Bronze Medal at this year's North American Young Rider 75-mile Championship in Kentucky.

"We do a lot of cross training with all our horses - dressage, jumping, riding to the gas station and tying them up to stand and wait... but Misu's a little different. I don't treat him quite the same as the other horses. Despite his difficulty though, he's a sweet horse."

The Pennsylvania native, who now lives and works for the Rojeks in Vermont in the summers and Georgia in the winters, crewed for Steve Rojek in the Pan American Championship in Uruguay in 2009, so he has some idea of the kind of international competition and flavor that the Juniors and Young Riders will face in the UAE Championship.

"It will be interesting, and a lot different... It's desert - sandy, dusty, maybe even a sandstorm to deal with. There's driving around, tossing water bottles... (In the UAE, a crazy number of vehicles race over the sand alongside the riders and horses in the race, with crews passing water bottles through the car windows, or crews jumping out at regular intervals, handing out water bottles to riders on the fly, so the horses constantly have water poured on them.) But I don't think that will bother my horse."

None of the adventure seems daunting, and Kyle feels fortunate to be participating in it.

"I'm expecting we can do well; I'm hoping we can complete a team and maybe earn a medal. It will be so cool, meeting all these people from all over the world. It's going to be great!" 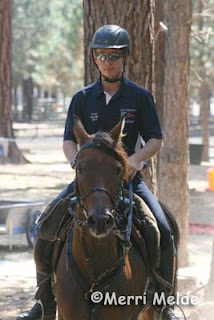 Posted by The Equestrian Vagabond at 6:06 PM