It's not often a farm celebrates their golden anniversary, but Holly Farm of New Zealand is doing just that.

It was 1864 and six generations ago when David Marshall's Scotch ancestors emigrated to the South Island of New Zealand and bought the land that is still Holly Farm today.

It was 1961 when David's father, Lester Marshall, began breeding Arabian horses. His first significant acquirement was Silver Sparkle, "one of the world's most royally bred stallions" at the time. By Oran out of Silver Fire, "the Queen of Crabbet Park," a champion at the Richmond show and foundation mare of the famous Silver line, Silver Sparkle had been bred by the renowned Lady Wentworth of Crabbet Park in England.

Over the years, David has followed his father's tradition of acquiring select Arabians with classical clean lines and the athletic ability to perform to include in Holly Farms' breeding program, “to ensure that a suitable horse is maintained for the pleasure and use by anyone who appreciates the highest unique qualities found only in the Arabian breed.” The Holly Farm get has been and continues to be successful in the showring and on the endurance trails.

In celebration of Holly Farm's 50th anniversary and its contribution to the world of Arabian breeding, showing, and endurance riding, David Marshall has donated a breeding to either Zaddam or Pradaa as a fundraiser towards the efforts of the Mt Nimrod Club, hosting the first FEI World Qualifying Series for New Zealand towards the 2012 World Endurance Championship in Great Britain. 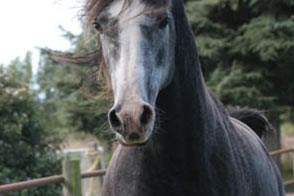 9-year-old Zaddam (by Anwar Sadat x HFA Mazriah) is half Crabbet, half Egyptian Arabian. David showed him as a yearling and as a 2-year-old, both times winning "A" class Supreme Championships. As Zaddam's career progressed, he won Champion Ridden and Champion Costume, and is also a CEI* level Open Endurance horse. His progeny have already been successful in the showring and will soon be tested as endurance horses. 11-year-old Pradaa is a Russian stallion (by Naazim x GG Sasha). Naazim is a half-brother to Naaddel, who was purchased by Lester Marshall and introduced to the Holly Farm breeding program in the 1970's. Naaddel was awarded the Roll of Merit for his successful, winning progeny. Pradaa is the sire of the first foal (out of HFA Mazlinta, from the Silver Fire line), born in October, of Holly Farm's 50th season. "This breeding is donated to the Mt Nimrod Club who have gone way and beyond to support our sport of Endurance, and putting forward a full and complete schedule of CEI and CEN rides, which truly reflects what is possible," David says. "An inspiration, thank you." The ride will be held 11-13 November.

Posted by The Equestrian Vagabond at 9:44 AM