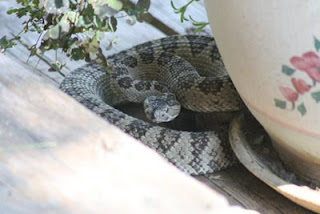 Rattlesnake where there was not one before, has never been before, curled up beside a pretty flower pot on the second step, 5 feet from the front door, rattling at me, coiled, head up, hissing, ready to strike.

Steph came running to the door.

I switched to English. "Sh&*T!" I pointed. "Rattlesnake! Right there!" My heart was racing.

We'd actually seen one - probably the same one - last night in the driveway by the creek. I'd almost walked on top of it before I realized it was a rattlesnake. It didn't rattle at me, just got out of the way and watched me from the bushes. Steph tried to get it with the hoe, but it escaped.

Since we'd missed killing it last night, we didn't want to miss him on the front porch today. This wasn't a job for girls. We called Rick. I took a few (telephoto!) pictures of the snake while we waited for Rick. I was still shaking so most of them came out blurry.

Rick brought a hoe and a rake. He didn't have a real clear shot at the rattlesnake to chop him in half with one blow (and he was a fat rattlesnake), but he tried, swinging the hoe blade down and pinning him with as much muscle as he could muster, and then he tried to crush him behind the head with the rake.

That snake did not want to die. It writhed, twisted and bit the rake, fought, struggled on, and as it died, it kept fighting. I think it did die and it kept fighting. When Rick finally severed the whole head off, the biting finally stopped, but the body kept writhing and rattling for a good 5 minutes.

I did feel sorry for the snake, and said a little snakey apology as he departed - but we have plenty of good snakes around here, and we're not putting up with rattlesnakes with all the people, horses and dogs around.

Sorry rattlesnakes, but you're not welcome here! 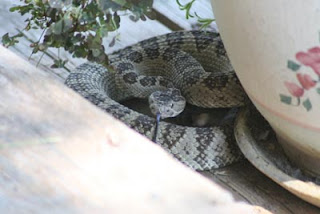 Posted by The Equestrian Vagabond at 9:27 PM