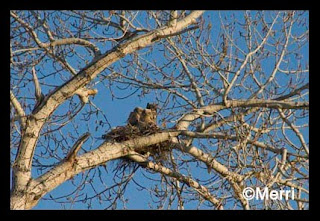 The Great Horned Owl pair that raised three young last year moved downstream one nest (taking over a red tailed hawk nest - and the red tail is in their old nest), raised two young this year. The Great Horned Owl gets first choice - they begin nesting earliest. The owls are on just about exactly the same schedule as last year: these photos were taken May 1, an evening after I'd seen them lumbering around the edge of their nest, flapping their gangly wings, getting ready for their first launch. A couple of days later, they were gone. 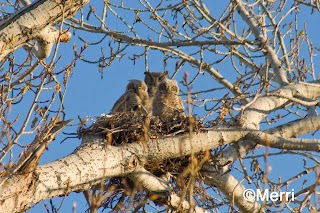 The Great Horned Owls up the creek did not nest. I could not find a Long-Eared Owl nest (last year there were two).

And the best for last: the golden eagles in the tree nest down the crick - after sitting on an egg(s) then abandoning the nest last year - have successfully fledged a chick this year! The mother (or father - they switch off) - sat for weeks low down in the nest; a couple of weeks ago we saw mom (or dad) sitting on the edge of the nest, but we could never see anything in the nest - until today, when I spied a white fluffy eaglet sitting up begging from an adult! 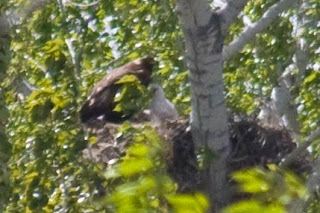 I'd parked as far as I could from the nest while still being able to see it with my binoculars. Mama ignored her baby and eyed me the entire time I sat there, so I didn't linger too long. The eaglet showed himself just in time, as spring has suddenly hit with full force, busting out the leaves on all the trees almost overnight. Soon the nest and everything in it will be invisible behind a curtain of green. 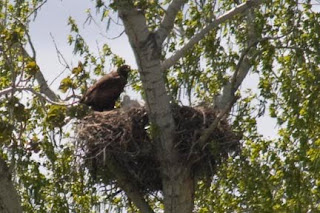 We're looking forward to seeing 3 golden eagles flying along the crick soon!
Posted by The Equestrian Vagabond at 5:38 PM