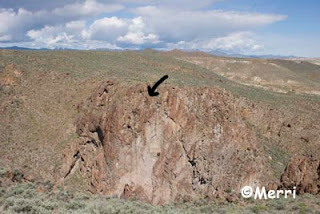 I went out with retired bird biologist Karen, to check up on a couple of eagle territories. 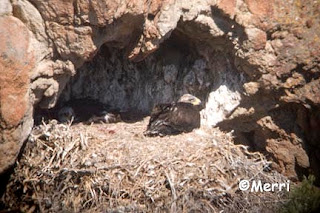 The Brown's Creek golden eagles whose territory and nests I found last year, who raised a youngster last year, have two babies in the nest - big babies! (Note the one laying down in the back left of the cavelet.) The adults moved to a different nest this year on the same cliff face - a nice nest with a little cave, plenty of room, a choice between sun and shade, and shelter from rain and snow. You can see the eaglet in the sun panting from the heat. It wasn't hot today, but you can see why heat is a big killer of eaglets. 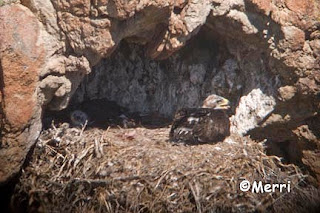 Karen estimates their age to be 6 weeks.

Mean fledging age is 63 days. A nesting attempt is considered successful when the young is 51 days old.

The golden eagles down the creek on the cottonwood tree nest are still raising their one eaglet! There's a big difference - size, feathering and maturity - between her (I'm just guessing it's a she) and the two cliff nest eaglets. Karen estimates this one to be 4 weeks old. 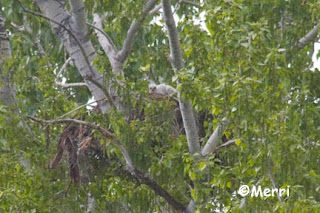 I checked on another canyon that was known to have historic eagle nests. I sort of 'rediscovered' these nests last year that haven't been monitored for many years. For at least the last two years, the territory has been unoccupied, though the whitewash around two of the cliff nests isn't so very old.

One can see why this nest might be undesirable from the big rock that fell in it... 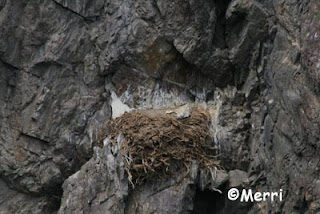 though this one looks good to me. 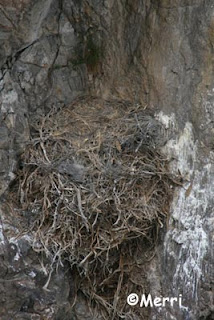 But then, I'm not an eagle.

We'll check on these nests one more time - between the 51 and 63 day marks - to see if they can be labeled Successful.
Posted by The Equestrian Vagabond at 5:07 PM