Don't Tread On Me 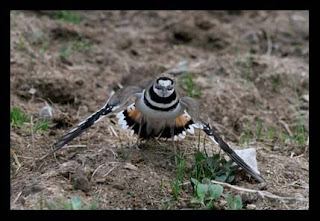 The horses had wandered into the back pen - somewhere they don't often go, even though the gate is open and there's a bale of hay in there. I was hanging out with them, watching them, petting one here and there, when I saw a killdeer streak across the ground, start its chittering distress call, and start its broken wing display to distract me from where I was walking - a sure sign she (or he) was on a nest.

I stopped and looked away from the bird at the ground, searching for eggs. Her display got louder and more wounded looking - she'd run at me, 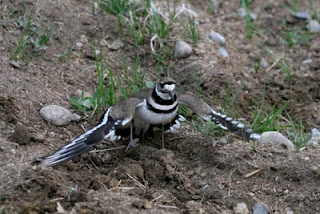 and when I'd look at her, she'd turn and flash her bright orange and white tail at me, 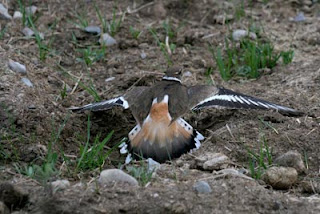 and drag a wing and limp away.

After much scrutinizing of the ground, 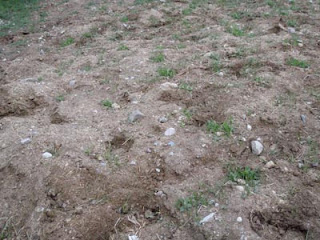 I spied her nest - 4 spotted eggs in a little indention on the ground! 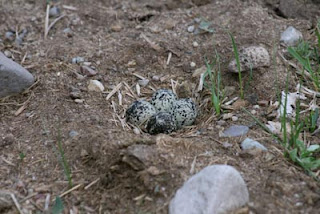 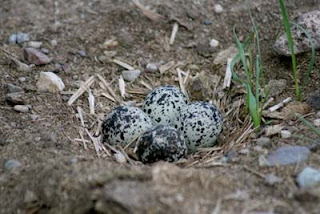 On the ground, with 9 horses roaming about picking at slim blades of grass. At one point, looking at the closest horse, I lost the location of the nest briefly, because the eggs are so well camouflaged - and Sunny had all 4 legs on either side of the nest when I found it again.

I stood guard near the nest to keep the horses off it, and watched the killdeer. She was most worried about Jose, who was closest - she tried distracting him with her display. 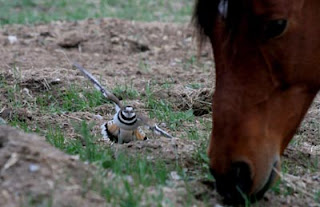 It worked at first, he stepped toward her to investigate, but went back to eating 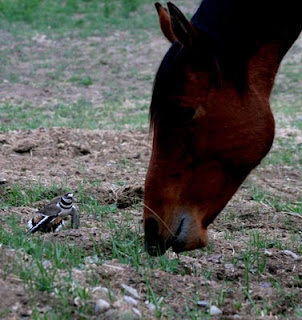 when she ran away and flashed her tail at him.

Mac and Smokey both were interested in the bird, thinking maybe she was a toy, and followed her for a few steps... but lost interest when she ran away. But it worked - she'd lured them away from her nest. She was a bit harried, with all these giant creatures about, not knowing which to worry about most.

The male and female will incubate the eggs for 24-28 days.

I've gone and put up a little fence around the nest, so the horses won't tread on it. 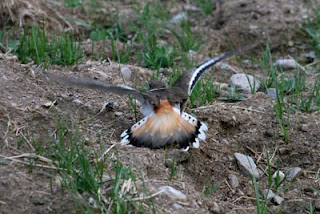 Posted by The Equestrian Vagabond at 10:10 AM