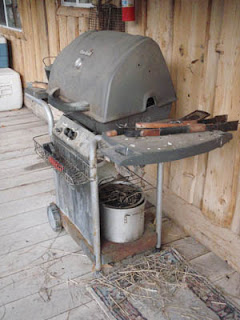 Six nights ago, John went out to barbeque some steaks.

He found a European starling had started building a nest inside the barbeque. 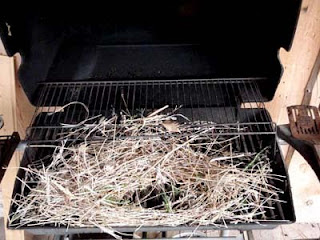 (Look at the artwork!) 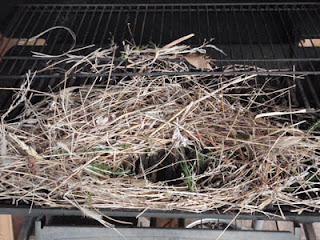 The starlings don't have the best nesting record right around the house. Two springs ago, a pair built a nest in a hole in the eaves in front. We eventually heard several babies - at their most noisiest when mom and dad were approaching with food. One day we suddenly heard them no more - no way they could have fledged that fast... and we saw a bull snake coming out of the hole. No more baby starlings.

Last spring, a pair of starlings tried the back of the house - an opening in the wall that went behind the house water heater. Ah, nice and warm and protected for the birdies. The parents were harried and hurried, feeding their hungry noisy babies during our busy endurance ride in May, dodging and trying to sneak around all the people coming and going. Then one day suddenly, we heard the babies no more. No way they could have fledged then, either. We finally took apart the wall and found only feathers and skin and a few bones: packrats got them. No more baby starlings.

This spring: it seemed like a great spot. Nice protected, roomy space with 2 little subtle entrances. 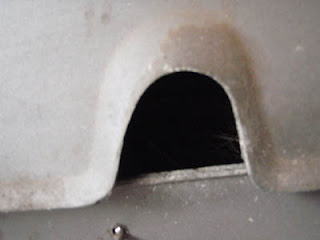 Except for the human barbequeing factor. John removed the nest and barbequed his dinner. Two nights later, the birds were back and the nest was back, 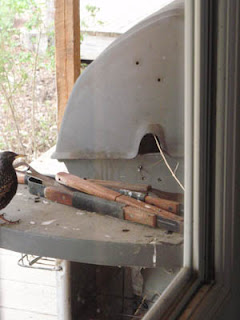 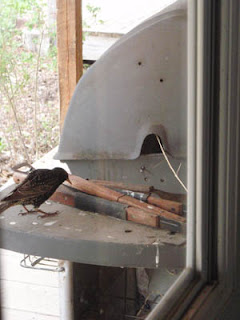 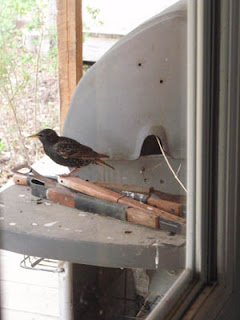 and by morning, it was awfully big and comfortable looking.

The National Geographic Field Guide to the Birds of North America says of starlings, "Bold and aggressive, often competes successfully with native species (I guess that would be us humans) for nest holes."

But we can't go 5-6 weeks without the barbecue. (And the thought of bird poo, feathers, mites and maybe baby bird pieces left behind in the barbeque is not so appealing).

Strike three. They're outta there.

TENACIOUS, these Owyhee European starlings are! 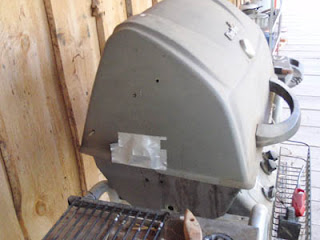 ... and next day by noon another nest was half built 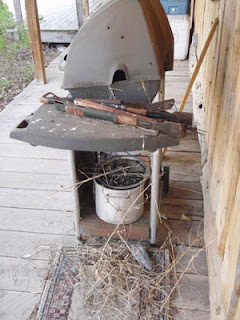 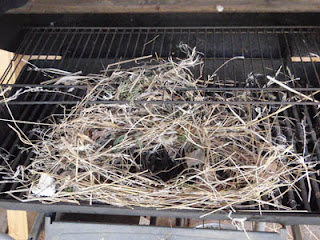 Such a shame to dismantle it, AGAIN).

I removed the nest once more, told Ma and Pa starling (the male initiates the building of the nest, and the female completes it, adding lining) to GO FIND ANOTHER SPOT! and left the barbeque open... and that has seemed to stop the nest building. They can join the ranks of other starlings building nests in the eaves of the barn.
Posted by The Equestrian Vagabond at 6:07 PM