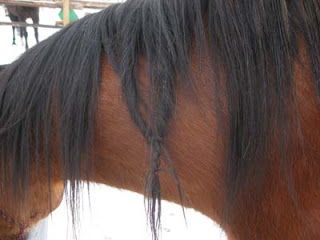 It was a medium sized one, but a good one. 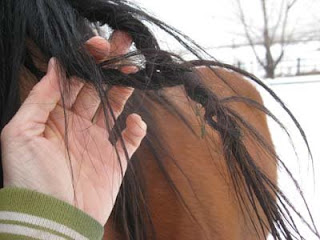 Intricately divided and twisted, half-hitched and diamond hitched and flipped inside and out, entwined together and woven apart and back together, the Knot defied logic. 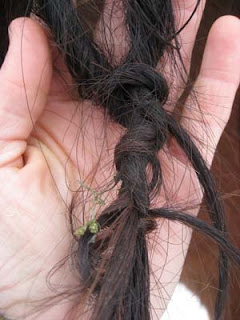 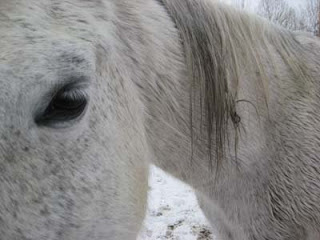 It was much like Jose's, just a miniature version, but intricate nonetheless. 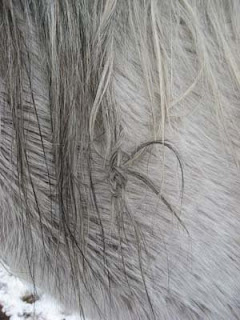 Wish Knot/Witch Knot - I call it both. So tangled it's a Witch Knot, and I sure Wish this Knot was not in there.

So I haltered Jose and took him out for an appointment at the Owyhee Hair and Snack Spa, set him up with a wheelbarrow full of the good hay (a special treat), and worked on his mane Knot. Mane Detangler or Showsheen or Cowboy Magic are great for working knots out without losing too much hair. So is cooking oil if you're desperate (and if you're going to shampoo afterwards), and so is any hair product with silicone in it. It took a while, but I got the Knot out, and Jose once again had a smooth, straight, shiny, mane. 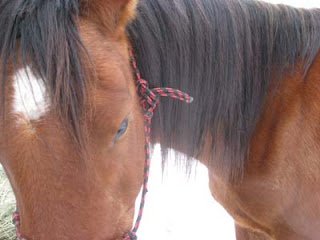 So, seriously, what's up with the Wish Knots in the manes this morning? Jose and Quickie NEVER have knots in their manes. Was it a Horse Hair Witch? Did the horses get together and work on this, and if so, with what - their noses? Their teeth? Their hooves? Was it a Weather Witch - the sheer sheets of ice that came down last night, followed by 2 inches of snow? Don't you think it's very odd that it would just be a coincidence that two horses who never get knots in their manes both had them this morning?

Sometimes I prefer not to believe there's a scientific explanation.
Posted by The Equestrian Vagabond at 9:01 PM