No Living With Him Now 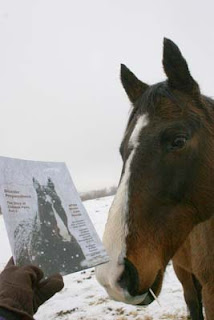 Boy, ONE picture on the cover of a magazine, and it all goes to his head.

Stormy's no longer just another brown horse in Owyhee county, or just another ex-racehorse. He's a BIG STAR. He's a DIVA. And he's got BIG DEMANDS now.

Free and full access to all the alfalfa and grain he wants. A bucket of carrots twice a day. A gold blanket. A silver water trough. A new five-horse shiny aluminum padded trailer. A gilded stall. Adulation from his fans.

Actually, he took one look at his photo and, seeing it was a magazine, and not a magazine with a carrot inside, he stuck his head back in the hay. 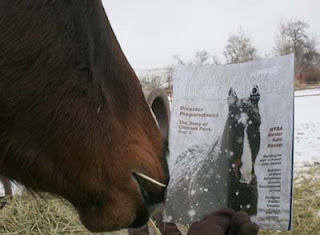 He's got enough hay to eat, and he gets carrot treats. He doesn't need a blanket, he's got a nice warm winter coat. He has a running creek to drink from. He doesn't like stalls; he has a couple hundred acres to roam. He doesn't want a horse trailer, he likes it in Owyhee county just fine.

Food, treats, warmth, freedom... And he's got me, his biggest fan, who tends to adulate him to excess. Sometimes to his annoyance.

Coverboy, or no Coverboy, it makes no difference to him. He's already got all he needs. 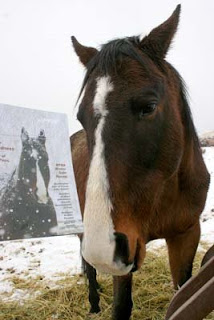 - It's the Washington Thoroughbred magazine - Stormy's home racing state in his glory days!
Posted by The Equestrian Vagabond at 1:50 PM