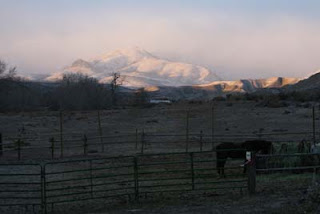 That big first winter storm I was all excited about? Well, this isn't exactly what I had in mind.

What I woke up with is: very slight evidence of snow. Whether it was a real serious snow or not I wouldn't know, because the wind whipped up a gale during the night, blowing all our snow (if we got it) to Texas. It should be arriving there about noon. There's probably a good dumping of snow in the Owyhee Range 6 miles away... but I can't be sure, as everything but the Rooster Tail foothill is currently visible, and that has a dusting.

And the only difference between a hurricane and the gale that kept me up most of the night, (sleeping in the living quarters of the horse trailer - wind whistling and howling through cracks in the windows, things flapping and popping) was about 70 degrees. Wind storms like this always make me think of, say, the Donner party, part of a wagon train snowbound in the winter of 1846-7 in the Sierra Nevadas and the raging blizzards they lived through, or the storms of the Dust Bowl in the 1930's, in Oklahoma, where the wind howled and moaned and screamed and drove people crazy. Or that hurricane my family and I stayed to weather out in Texas in 1981.

Now, I'm not complaining, mind you, as it's really COLD : ), and especially as the horses appear to be handling it with ease - everybody's heads are buried in the hay out front; the horses in the back Fat/Lame/Naughty pen either have their heads buried in the hay, or their butts backed up against the windbreak. Stormy's hair is standing on end - he feels like a soft woolly bear. In no wind, the hair standing on end creates an airspace around the horse that can trap heat and keep him warm, but when the wind is blowing, it blows away the trapped warm air. But none of them are shivering. And the eating helps keep them warm.

While I'm definitely not complaining, I'd just been hoping, for, say, 2 inches of snow and a 5 mph gust of wind now and then, not a 50 mph gust and no snow on the ground.

But we still have a little chance of snow during the next few days, and the wind will die down, and then the temperature is going to drop... low 20's during the day and teens at night. I don't have my snow yet, but winter is definitely here!

Anybody up for a ride?
Posted by The Equestrian Vagabond at 9:23 AM