Mac is now on his third blanket in a month.

He and Rhett are wearing blankets 24 hours a day, because Steph and John are taking them south for part of the winter - aiming for the 4-day Death Valley Encounter and the 3-day Eastern Mojave Scenic, both in southern California, and for a snowbird hang-out in Scottsdale - and Steph doesn't want them to grow a winter coat.

Mac already thinks he's in Horse Heaven, what with getting grain and treats regularly, and now - getting to wear a blanket! Only special horses get to wear blankets! I dare say he never wore one his 9 years on the Rushcreek ranch in Nebraska. He didn't even know what carrots were.

One or two of the other horses are also enjoying Mac's pampering. The blankets make great PLAY TOYS.

I don't know who ripped his first pink blanket, but it became a big enough rip that the strap was in danger of falling off. 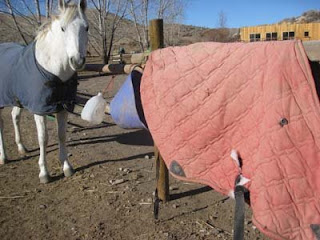 One day I saw a few horses not really interested in all-out playing, but rather pestering each other. Mac and Finneas were frozen in a nose kiss ("I can push harder than you!"). Jose picked on Dudley, though Dudley turned his butt and threatened to kick rather than play. Kazam was poking horses with his nose. Then Jose was nipping at Mac's nose, and Finneas was leaning on Mac's butt. Not two minutes later, I saw white stuffing sticking out of a rip on the butt of Mac's blanket. 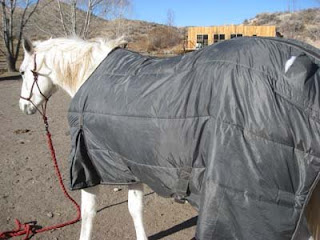 "FINNEAS!" But Finneas was mum. I didn't catch him red-handed, so I couldn't be sure it was him. And no way to really sew that up - the thin crinkly material won't hold stitching - maybe duct tape would stick to it.

Today, I was outside doing something when this little ball of white stuffing rolled past my feet.

I went up to Mac at the water trough, and sure enough - a new long rip on one side exposed stuffing entrails, and even part of Mac's skin. 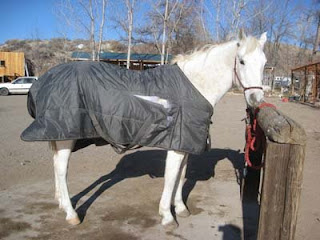 There was a wet spot right by the rip. Who was standing next to Mac with a wet, dripping mouth? Jose.

But I could understand - really, once you taste the stuffing of that blanket, it just makes you want to rip out more!

So I brought Mac to the hitching rail, took his crinkly blanket off, and dug through the many blankets in the trunk. Steph seems to have a lot of blankets that fit ponies, though I don't know that she's ever had a pony. I found a blue blanket that somewhat fit Mac, and took the pink one to Carol to repair. 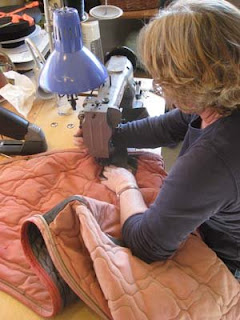 She's also going to give me some sour apple spray to spray on the blanket - maybe the other horses will leave it alone this time.

Or, maybe they'll love the taste of sour apple and rip it up more - I used to put a hot pepper/detergent concoction (that made my eyes water) on horse bandages at the racetrack, and some horses loved it and ripped their bandages right off!

Mac doesn't mind all the attention, and what the heck, he doesn't have to patch up the blankets.
Posted by The Equestrian Vagabond at 5:00 PM