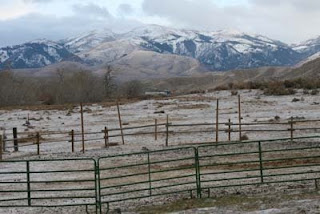 It's been so dry here this fall and winter - all year actually - and I've been near panicking, since it's already December, and we haven't gotten any snow here yet. It's been cold - freezing most mornings so that I have to break ice in troughs, and the poo I shovel out of pens has been so frozen to the ground the last few days I can't scoop it up! - but dry. We've had a smidgen of snow in the mountains maybe twice, which melts away in a few days, but nothing down here at the house. And the forecast may say 90% chance of rain or snow, and it may be raining or snowing around us, but in our little rain shadow drainages here, we often get nothing.

Sure, we can't ride much in the snow, unless we know it's going to snow all winter, so that we know to put special pads in the horses' feet, but dang, I love the snow. I love little rides in it, I love to hike in it, I love the cold, I love the beauty and the quiet. I've never spent much time in snow, so I'd rather have a lot of it when I get the chance - like we did last winter. (Everybody here thinks I'm crazy.)

After worrying so much about the drought and absence so far of snow, I went and looked back at my stories from last year; and the first real snow didn't come till December 7 - which is only yesterday a year ago!

And look at what I woke up to this morning! 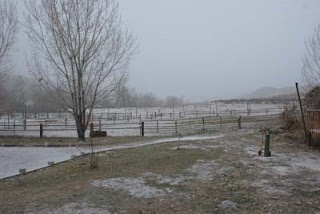 I was so excited I had to go stand outside in the flakes coming down. It actually dropped enough to stick a little bit to manes and coats briefly, 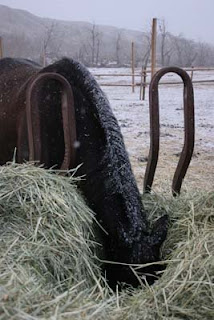 and to almost completely cover the ground in sifted white powder. It stayed on the ground for an hour, (and even several hours in the shaded spots), before the sun and wind came out and it evaporated, and the clouds left for good.

It wasn't enough snow to get excited about, and there's nothing more tantalizing in the forecast for the next four days, but it was enough to give me hope... 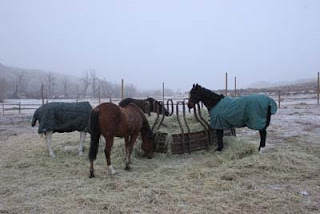 Posted by The Equestrian Vagabond at 11:55 AM