This weekend was my first time to watch polo. Stacey the vet was playing in the second game.

High intensity and serious playing the first game: lots of shoving and swearing and hot tempers. One referee had to warn one of the players. Fast horses, serious bits and tie downs 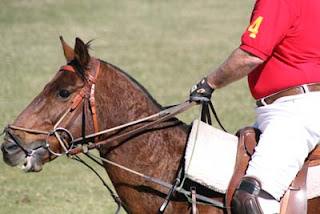 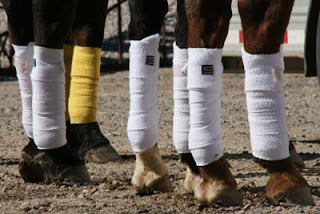 The second game would be less intense, and Stacey had the right idea: go out and have fun! "I haven't played polo in a year and a half, so what? I have never ridden these horses I'm borrowing, so what? Come on - we're chasing a little ball around with sticks on horses. How seriously can you take yourself?"

Polo started in Persia in the 6th century BC, both men and women playing. Most of the horses nowadays are Thoroughbreds (many off the track) or Thoroughbred crosses, with a quarter horse or paint thrown in here and there.

There are 4 riders on each team, 4 chukkas in a game; each chukka lasts 7 1/2 minutes. It's usually fast paced and furious - sprinting starts and skidding stops, 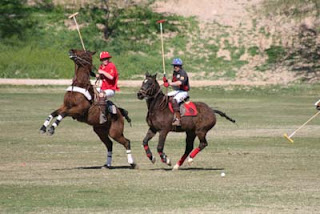 whirling around, running across the 100 by 50-yard field, horses bumping, riders bumping and leaning out of their saddles. Horses must be rested for at least a chukka before going back on the field.

Then there's the object of actually hitting the ball with the mallet, either forward or backward or sideways, while always on the move, trying to get them through your 2 goal posts at the ends of the field.

Stacey started on a stout paint mare, spent the first 2 minutes of the first chukka swirling in the cluster trying to break the ball loose. Then there was Stacey sprinting across the field after the ball, urging her mare on, polo stick in the air, racing another rider; there was Stacey and the paint mare getting the lead and positioning themselves to get a good aim on the ball; there was Stacey slowing and starting to make a curve at a gallop; there was Stacey's saddle, something dangling and flopping underneath the horse (the girth), 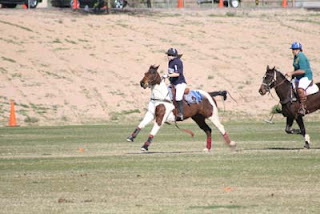 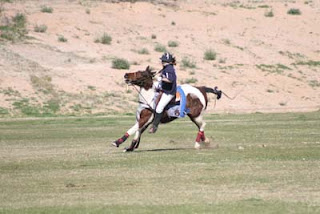 with Stacey crashing straight to the ground.

There was Stacey rolling under hooves; there was the paint mare, saddle under her belly, continuing across the field, starting to buck, getting the saddle onto her hips, panicking, bucking frantically, running faster, past the goal posts, aiming for the spectators near the fence, spewing stirrup leathers, broken breast collar, cinch, and, finally, the saddle, and swerving to a stop at the fence.

There's people catching the mare and starting to lead her out the gate; there's Stacey getting up, saying, "Oh I'm all right," and heading off the field.

Now, I don't know about you, but I'd have limped right on to my car as I walked off the field and drove home, taking this as a sign that maybe I should wait another year and a half before I try polo again, and definitely on a different horse. Stacey is not me, and she was not limping, and she climbed right back on the resaddled paint mare (new cinch tightened) and went right back out onto the field, and on went with the game, just another day on the polo field! 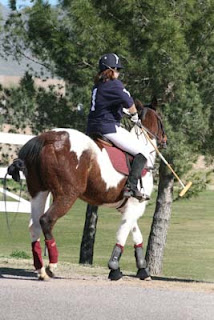 Stacey did well the rest of the game, as did the little paint mare, who came out again for the 4th chukka. After the game, Stacey petted her mount and took her for a bath. "She gets real physical out there, she knows just what to do. She loves it out there!"

As does Stacey apparently - she's headed back tomorrow for another game, hopefully with a good and tight cinch this time... and maybe a bottle of Ibuprofen and a tube of DMSO.
Posted by The Equestrian Vagabond at 7:01 PM