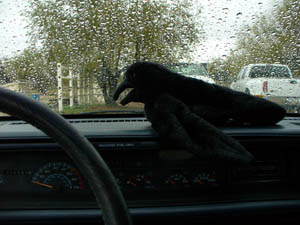 It's been - yikes - 5 months since I've done an endurance ride (!), and a good two months since I've really ridden a horse, due to all the snow and ice in Idaho this winter. But that wasn't stopping me from heading to the 3-day Eastern Mojave Scenic ride near Baker, California - 3 days in the beautiful desert of the Mojave National Preserve. And it would be nice story for endurance.net to cover. Put on by The Duck, you can always expect great scenery, a challenging trail, good lunches and dinners, a good crowd of people who enjoy riding their horses long distances in scenic country - and this year some visiting Aussies - and... a few surprises here and there.

Established in 1994, the Mojave National Preserve 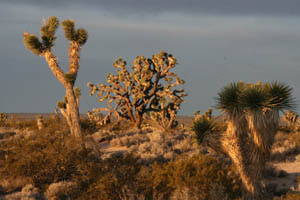 at 1.6 million acres is the 3rd largest national park service area outside Alaska. It may look barren from the interstate if you're in a hurry to get to LA or Las Vegas, but hop on a horse and ride out there among the canyons and mountains, cinder domes, sand dunes and sandy washes, Joshua Tree forests 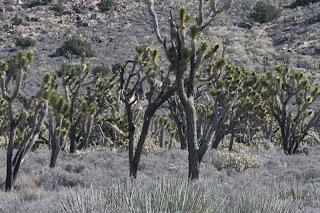 Gretchen was bringing her two horses for us to ride, and I'd be bunking down in the back of their comfortable big white truck. I made us a yummy popular casserole, but left the details (morning coffee, half n' half, oatmeal, extra food, snacks, ibuprofen, eye drops, shower, freezer for ice, oven for warming up the casserole) to Gretchen.

Now, all us endurance riders know that when it comes to endurance rides, you can't always plan everything out and expect everything to go according to those plans. We must be quite flexible - your horse has different ideas, the weather can be awful, different adventures can happen before and during the rides that change your course without you really having a say in anything. I brought my Raven and extra water and sleeping bags, and I brought several bags of clothes and things (Rusty said "HOW long are you going to be gone?!"), because you just never know what all you might need. (And if you do forget something important, Rebecca J will have it!)

The Raven was excited, hopping onto the dash as we drove out of Scottsdale in the rain (again!), and headed across Arizona to California. I decided to turn on my phone about an hour from ridecamp, and, for someone who does not use their phone at all, there were FOUR messages waiting for me. Oh dear, this can't be good.

The first message was Mike, Gretchen's husband: "We were just getting ready to leave for the ride and something happened to Gretchen (she had surgery a month ago), something ripped internally, we're in the emergency room. Jackie might be able to bring you another horse if you call her right away. Sorry!"

Second message is Jackie B: "It's Jackie - if I hear from you, like now, I can bring you an extra horse, but I'm leaving now, and I don't want to bring her if I don't know if you're coming for sure."

Fourth message: Sharon L, the producer of the Gospel at Colonus show I'm a sound engineer for: "We can't do the show in July in Athens, but we can do 4 days in June, with one performance. Everybody can come, just waiting to hear from you and Butch." (Ohmigod! - but this is a whole 'nother can of Ravens, for another story!)

The calls were from several hours ago, and since I was so close, I might as well continue on to the ride. Maybe I'd find another horse, or I'd help at the ride, and either way, I'd take pictures and do a story. I had plenty of gear - maybe short on food, and of course no grocery store anywhere, but I could bum off people. I know some people who do that anyway : ) Coffee would be a sort of necessity in the morning, but that shouldn't be too hard to find.

The first people - rather, horse - I see when I get there, is Sierra, Shirley R's horse. A group from Ridgecrest was at Shirley and Billy's trailer, and Shirley and Billy offered me dinner, and Ann K offered me her extra horse Razzy to ride! In five minutes I had a hot meal going down and a horse to ride for tomorrow. 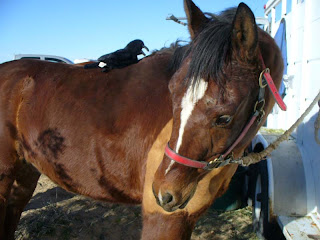 After we ate, Ann and I saddle up our horses (Razzy had his special saddle) and we took them out (with Rebecca from Ridgecrest, riding her first 50 tomorrow with Shirley, on her little pony) and I tried out my mount. Ann said he could be a bit feisty, but he was a great little horse. And not so little - he's over 15 hands, and quite stout. "He's a good keeper," Ann said. She didn't expect him to lose any weight during the ride, that's how good a keeper he is. And tomorrow, Razzy would get his 1000 miles. 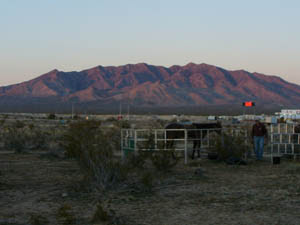 After vetting the horses in, Ann and I came back to the trailer to try to get everything organized... we rushed around in the dark, setting up horse food and crew bag and gear for the night and tomorrow.

I brought the Raven along to the ride meeting at 7 PM... I knew Jay Randle from Australia was supposed to be here... and it was Jay who picked me out after the meeting. I pulled the Raven out of my pocket for a meet n' greet... I don't know who was happier to meet the other - Jay or the Raven!

I met the other 4 Aussies, Jane, Lela, Kim, Rebecca... several of whom had chattering teeth, as it was a bit colder (about 43*) than the Aussies are used to this time of year.

Then it was back to the horses and trailer, make sure everything was ready for the morning, then one more change of plans for my sleeping arrangements - into the back of the Teeter's Big Blue car seat for a few hours of snoozing before a 7 AM start time.
Posted by The Equestrian Vagabond at 2:49 PM