This was Rhett 3 weeks before: 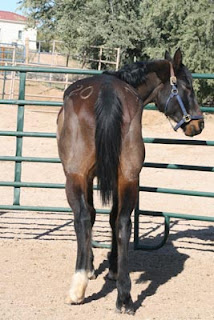 And this is Rhett now. 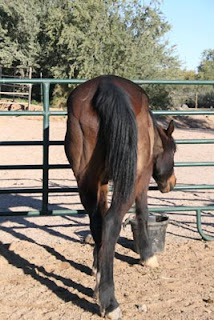 Getting better, no temp, last of the lump under his jaw disappearing, legs no longer swelling, good appetite, tail carriage up, finally putting weight back on. Symptoms started coming back 10 days ago, so he went back on the daily antibiotic shots; and fearing his guttural pouches had become infected - which would mean a costly, and rather dreadful, treatment - we Xrayed his head. Fortunately, nothing showed up, but we are keeping with the antibiotic shots a while longer to make sure this is going to really get knocked out this time.

Rocky finally started showing symptoms of strangles a few days ago - thick snot in one nose, and coughs. That makes the last of the 7 horses having finally gotten the nasty disease - though some got much sicker than others.

They all feel good enough, when I turn Jose and Rhett with the others, to run 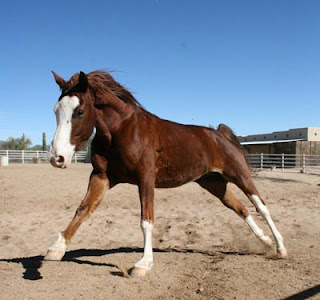 around the big paddock together, 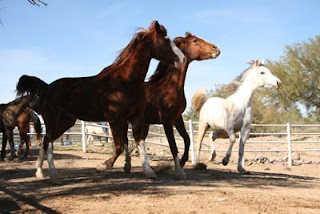 and, if you're Rocky, to run around to avoid being caught. 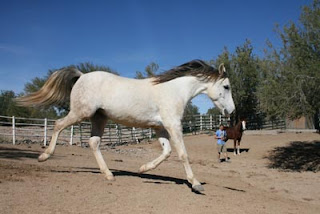 The horses all had the strangles - and now I've got it. Thick snot on one side of my nose, swollen glands, cough, feeling like absolute crap. I know how the horses felt.
Posted by The Equestrian Vagabond at 12:40 PM