Well, it was a good day yesterday, 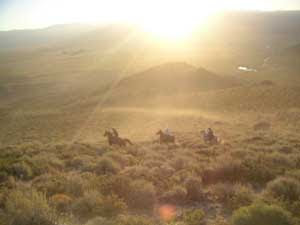 Gretchen and I were going about our usual pace mid-pack, 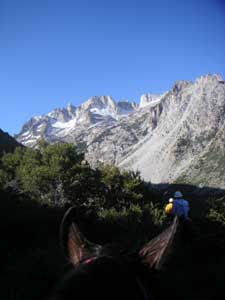 on fit horses on trails they regularly trained on and knew well, 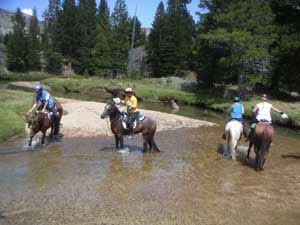 and after arriving at the last vet check at about 43 miles, Spice took a few minutes to pulse down to the criteria 60 bpm pulse (which is not unusual) – she was at about 64. After she came down, she drank, and ate a few bites (just like she’d been doing all day), then suddenly she started pawing the ground (not usual), and had a dull look in her eyes – like she was uncomfortable. Gretchen took her to the vet, and they decided to pull her and trailer back to base camp. Gretchen unsaddled her and started to load Spice in the trailer, where she tried to lay down. They took her out, gave her banamine and kept her walking (she tried to lay down a few times), and were going to load her up as soon as she didn’t act like she wanted to go down.

Gretchen and I weren’t too worried – though a metabolic problem had never happened with Spice before, she didn’t look terribly stressed or in pain, and we were right at the vet check when it happened, and this was NOTHING like Zayante’s terrible episode last year (when Raffiq saved his life getting him 6 miles back to the vet check) where it looked to me (and others) like Zay was going to die. Raffiq and I went on to finish the ride, but as I waited back at base camp, 1 ½ hours had passed since we left Spice and Gretchen, and they weren’t back yet…

Another hour passed before they returned – Spice had to have more drugs than the banamine, but they didn’t have to hang fluids on her, and, unloading from the trailer back at base camp, she looked like the same Spice from this morning and at lunch, looking normal and alert and bright and wanting to eat everything in sight.

Who the heck knows what makes horses colic? We didn’t do anything differently than we’ve done at other rides (Spice has been doing endurance for 2 years now), didn’t feed anything different, didn’t ride any faster (this EHSC ride has a lot of hard climbs, and a lot of it is spent walking), Spice didn’t act any different than she does on other endurance or training rides…

A friend’s horse I was riding last winter starting acting a little funny on an easy routine training ride I’d taken him on – he got the runs on our way back, and I kept an eye on him at home, and sure enough, that turned to colic. He hadn’t eaten or done anything differently than he’d been eating or doing the last month I’d had him.

A few years ago when I worked on the trail crew, we’d work 10 days and have 4 off. One day I got back from a 10-day tour, hiked out back to see my horse Stormy, and there he was, in the middle of having a bad colic. Caused by what??

Zayante last year – 10,000 endurance miles and never a metabolic problem – carrying a light rider, in great shape and going a moderate pace, had a terrible colic in the middle of this EHSC ride, and no explanation for that.

Horses! Such big strong animals – and so fragile.

This changes the plans again for our training – I was going to take Spice to next week’s 50-mile Tour de Washoooo ride, but now I’m not. The Virginia City 100 is 4 weeks away… and right now that’s pretty debatable. Was this just a bad day for Spice and she just got a belly ache? Happens to humans – stomach flu, mysterious illnesses, and we’re fine after it passes. It happens to horses, and most of the time they’re fine after it passes. In fact, after discovering my horse colicking that one evening, I suspect that often horses colic when we don’t ever see it, and they just get over it. I guess we’ll just see how Spice does next time we take her out.

Buddy – well, he’s progressed a lot since Gretchen first got him, but he’s never really given any indication that he’d make an endurance horse. He’s too slow-gaited (he can’t walk fast, and he can’t trot fast, without wanting to break into a canter to keep up), and heavy footed, not real athletic. He’s supposed to be part arab, but you don’t see or feel any of that in him. He has gotten fit, and much more sure-footed over the year, and we thought he’d be able to do the 30-mile ride. Nope. He was pulled at the ~15 mile vet-check for lameness, even though he was doing his regular moderate pace. He will make someone a nice trail horse - just don’t put endurance horse on his resume.
Posted by The Equestrian Vagabond at 5:08 PM