A Disappointment of Ravens

Five of us drove out to the Hunewill Ranch to watch the raven invasion. We got there around 7, and waited, hoping they'd be there tonight. There were smatterings of ravens in the cow pastures all around, doing raven things - like a general milling about before the doors to the rock concert in the big arena open.

At 7:09 a raven flew up and toward the pole line... he alighted on a pole, sat there for 10 seconds (early to the party, no one else there yet), and he flew off.

The pasture ravens went about their raven business, those in further out pastures flying in a bit closer, many sailing around, visiting different groups, maybe looking for a last minute meal.

At 7:20 a group of 4 ravens flying in from the north flew directly to the pole line and alighted - doors are open! Let's go! Raven party started! Whoo-ahh! Let the raven works begin! 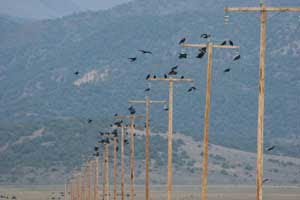 By 7:25 there were 40 ravens on the poles and lines. By 7:30 there were 60. By 7:35 there were 80. By 7:40 there were 150. Big black ravens cascading onto the power lines and poles, big beautiful ravens coming and going, swooping and swerving,diving and dancing, squawking and cawing (oh, for a microphone under those lines! - closest ravens were about 1/8 mile from us), a river of shiny black flowing lumps. They'd come by 1's and 2's, 5 at a time, landing on a wire and knocking 5 off, who'd fly down and swoop up onto another spot, making the wires sway, and 30 raven tails flip up in the air as they balanced themselves. A group of 10 flew in from the west, groups of 2's and 3's from the north, the upper end of the valley. (Hardly any from the south).

Flying way up high, 30 ravens flapped onwards with purpose, never slowing for the Hunewill party, bound for somewhere else, like maybe the Bodie Ghost Town party.

And all this happening, by the way, in a spectacular sunset.

7:45 there were about 250 ravens - a big "disappointment of ravens" - as a flock was called by early Europeans, who took a disliking to ravens (as well as crows: a "murder of crows"), whose images suffered as they feasted on dead bodies from medieval battles.

I beg to differ! There's nothing at all disappointing about watching ravens - the bigger the raven party, the better. And who created those dead bodies anyway? Not the smart ravens!

And then right around 7:50, 30 minutes after they started, the activity visibly slowed. The ravens were quieting down, getting situated for the night, except for a few here and there who forgot they had to go to the bathroom one last time, or raid the fridge for 1 last quick snack.

We left the ravens to themselves at dark. I went home to have raven dreams!
Posted by The Equestrian Vagabond at 5:04 PM