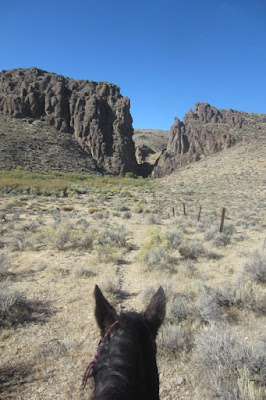 Numerous trails were covered in Part I.

Even more numerous trails were covered in Part II.

Mankind has named roads and trails since the beginning of time, to indicate where you're coming from and where you're going to, and to give you a kind of invested ownership in a place. Same thing here in Owyhee with the trails we ride. Yet even more examples:

Dudley Antler Loop
So named because, you got it, Dudley found, you guessed it, a deer antler when we were bushwhacking around the hills and washes back here. Part of it is the start of Merri's Trail (in Part I), but instead of heading right for Hart Creek, you turn off left into a wash downhill, then loop around to another steep uphill wash, climb a hill and find your way back to Spring Ranch road. This 'find your way back' part was where Dudley found his deer antler, and we returned and rode it enough times it's now a nice trail. You make a loop out of it, returning up Blonde Cow Wash - either on the trail alongside the wash, or in the wash. It's a perfect 5.5 mile training loop that you can make a hard or easy ride out of, depending on how much of the sand you trot in. 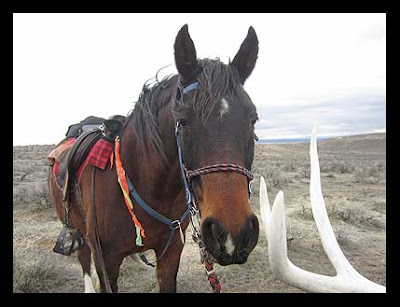 The Plane Crash
OK, it's not really a plane crash site, but you might not know it for all the metal sheets and pieces scattered along this trail. 'Plane crash trail' sounds better and more entertaining and light-hearted (?) than 'You'll be riding along this trail where Some dumba$$e$ mistook this for an actual trash dump, and dumped loads of metal - washer, drier, god-knows-what-all that will never degrade in my desert, thanks a lot, jerkweeds.'

I tell whatever horse I'm riding that, I know, it looks like a plane crash, but it's really just trash, nobody was hurt, and there's nothing to worry about, so just keep trotting onward.

The Dead Car
Not sure what the story is behind this one… maybe long ago somebody ran out of gas way out here and had to crawl out for help, or maybe it was a romantic date gone awry, but it's a very old rusted car (from the 20's? 30's? 40's? 50's? I don't know my cars) that drove off a little hill and is now half buried in the desert sand. It sort of pops right up on you as you crest the hill, so be ready for your horse to spook! 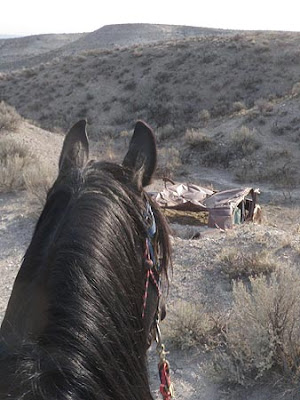 Commando Hill
Now renamed Toilet Paper Hill (in Part II), it was originally named Commando Hill when, riding up this hill, Diana's underwear were just not cooperating, and she stopped, got off her horse, and ripped them off, and went commando the rest of the ride. Or so the story goes. The toilet paper later came into play on this same hill, and "Toilet Paper Hill" just stuck. (Pun intended.)

Steph's Trail
If you don't have a lot of time, and you just want to get a horse out, like, say, a fat horse, like, say, Dudley who always needs exercise, on a short ride, you can trot or canter a good non-stop 1 1/2 miles of Steph's trail up on the SE flats, then either turn around and take it right back, or make a loop of it back along the Tower Trail.

Tower Trail
This trail houses the internet tower, the means by which all my brought-to-you-by-me stories are sent out into the enet-osphere. The last part is a steepish pay-attention-and-watch-your-footing kind of scenic trail back down into the canyon. You can trot or canter most of this mile-plus trail to the tower, with a bird's eye view all along and down into Pickett Crick.

Dudley likes to stop up here by this tower and observe the canyon below him. He has even fallen asleep on his feet up here, with me on his back, for like 5 or 10 whole minutes, until I finally wake him up to ride back home because I'm getting bored or cold. 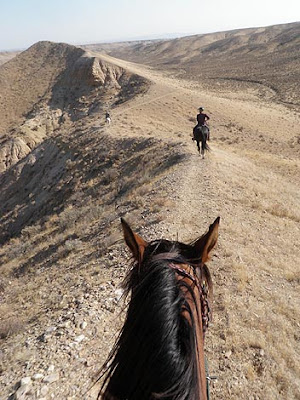 Rye Patch
Is a nice good-footing, fairly easy 18-ish mile loop, if you want to get a long one in with a lot of steady trotting. It goes out to and across the highway by the Plane Crash and the Dead Car and on the Bones Trail (in Part I). It's out to the NE. It's called Rye Patch because there's an actual dirt road we cross named Rye Patch. Because why, I don't know. What is a rye patch anyway?

Brown's Creek
It's out to the SW, also around 18 miles, and it has some good sand washes to work down, and some good hill climbing on the way back, including the second most scenic half of the Hart Creek Loop.

Hart Creek Loop
If we want to impress a riding visitor, we take him/her on this loop. You take Merri's trail (Part I) to and along the Hart Creek drainage, ride along the creek for a while and right up to the Little Hart Creek Canyon notch, (that's the top photo), then make a big climb back out of the drainage, along a knife(ish) edge ridge back up onto the flats. It is often part of our endurance rides, but we do only take visitors we like on this trail. 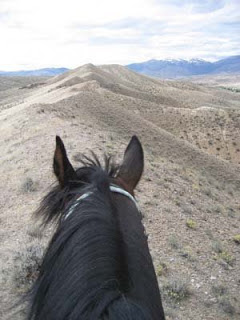 Rim Trail
This is often part of our endurance rides, the 2-track rim trail overlooking the Hart Creek drainage and the distant tiny 'burb of Oreana. It's pretty spectacular. Both Jose and Dudley love to stop along here and just look at the scenery. 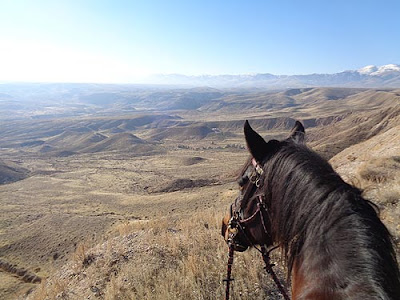 Carol's Gate
Somebody, who shall be left nameless, cut the fence wires and put this easy-open horse-back gate in the fence. I don't know who did it, but it's a safe gate in a Public Lands fence line that gives us easy access onto Our Public Lands, whereas we and everybody else was just going through the wash where the barbed wire had originally been washed and torn out.

Lost Juniper RANCH
Not to be confused with Lost Juniper Trail (in Part II), it's the ranch next door. But the Lost Juniper stories are common. When neighbors first looked at the ranch, there was a tiny juniper growing near the creek cottonwoods. Next time they looked they couldn't find the juniper, until it grew a bit bigger. Now, you still can't find the juniper - because it's so big it blends right in with the cottonwoods. In fact, when my eyeballs were pointed toward this "lost juniper," they immediately focused on the little juniper-child next to it. Both the ranch and the trail junipers are lost, except to those of us who know where they are.

Posted by The Equestrian Vagabond at 2:12 PM