Hillbillie Willie and the Dead Bunny 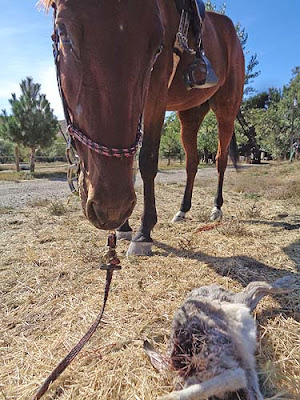 The jackrabbits took a big hit in the unprecedented heavy winter 2 years ago - pretty much the whole population around here wiped out. It's taken almost two years, but they've started to make a comeback. It's not too unusual now to see one on just about every ride, scooting out of the sagebrush or rabbit brush, their big ears swiveling like radar discs.

Most of the horses are not afraid of them, even when they pop out of a bush underfoot.

What *is* scary is a dead jackrabbit in your front yard!

Hillbillie Wille and I had a great ride this awesome fall morning, and I dismounted at the top of the driveway to lead him in. I noticed on the way in what I hadn't seen on the way out (was it actually there?? Or did it appear while we were out riding?): a dead jackrabbit with a hole eaten out of its back/neck. What's odd is that it was laying in the 'yard' by the driveway. Jackrabbits don't normally come out here into the grass-less front yard, and nor would I expect a coyote to snag a rabbit from out in the brush and bring it in here this close to eat. Maybe an owl or hawk was flying with it and dropped it?

Willie didn't see it as we passed it, and I didn't think anything of it, but then I thought to lead him back and show it to him.

I told him it was OK, it had been a rabbit, but the rabbit died and went to Rabbit Heaven, and now it was just a furry carcass. Not a big deal, we all die and become carcasses at some point.

Willie wasn't immediately convinced, because all rabbits he knows are hopping around with big floppy ears, and he stood at the end of his reins I was holding, and snorted and kept staring at the rabbit. I finally got him to step up, slowly, and put his head down and sniff the rabbit, but he stayed leaning back on his heels ready to bolt, as he wasn't sure there wasn't still great danger about.

After he stood calmly, we turned around and started back to the house, but Willie was walking slowly, and wanting to look back over his shoulder. He was still thinking about that dead rabbit, still had unfinished business with it. He wanted to go back and check it out again. 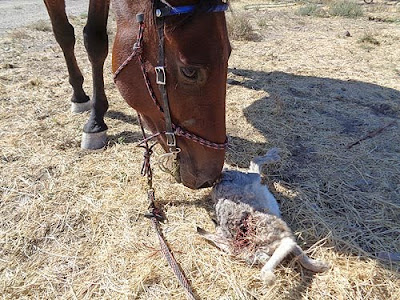 So I led Willie back to the rabbit, and he looked at it a while, then put his head down and slowly walked forward and sniffed the rabbit again and touched it. I told him it was OK. And I could see the cogs turning in his brain, and he decided, If he's really in Rabbit Heaven, and this is just his carcass, I guess that's OK then.

And as we walked on toward the house, two Ravens called from a tree and a post, waiting to snack on the jackrabbit meal conveniently waiting for them. 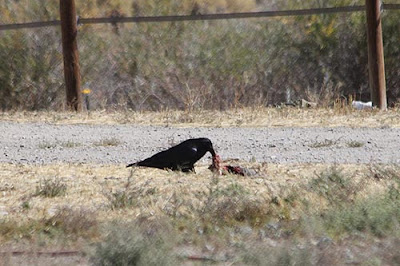