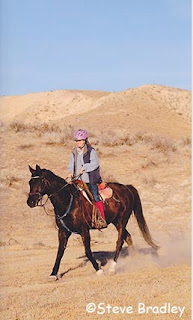 What I want to know is, who fed Finneas a can of WhoopAss before his 50 mile ride on Day 3 of the Owyhee Canyonlands??

This will not be much of a pictographic account of Day 3, because there were few moments where I could take one hand off the reins to take any pictures. Finneas was a two-hander, tougher-than-snot, total-concentration mount on Day 3, because 1) he hadn't done an endurance ride since June, 2) he was a fired up hot potato in his last couple of conditioning rides, 3) he spent the last 3 days before the ride cooped up in a small pen with the herd, 4) he always has to win, and 5) he's the Grandson of the Black Stallion, and don't you forget it, because he surely does not.

Thinking I'd ride with Sarah and Connie was a mistake… I should have just taken off in a Bubble (LOVE the Bubble - no riders in front and no riders in back for a ways), or waited 15 minutes after the start. But no, I tried to start with Sarah and Connie and that was a wash before I even crossed the starting line. Oh well. We went onward, or should I say, Finneas took charge and pulled me onward and upward.

We had a few little Bubbles on the first loop where I got a bit of a respite, but the rest of the time it was like this:
Finneas: "GO-GO-GO-GO!"
Me: "NO-NO-NO-NO!"

and back and forth we argued negotiated. Finneas already has a heavy winter coat (!!! hopefully this means a long snowy cold winter in store!!!!!!!), and I wasn't about to let him go as fast as he wanted to go (which was winning, like he knew he should be doing). 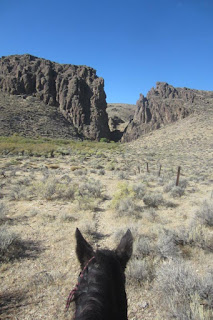 Finneas is a very rude snarky-barky horse when he passes others; he tries to mow them over, and if he can't do that, tries to cut them off… I came upon several riders in a wash that we passed, and I apologized ahead of time and re-apologize here for his obnoxious grandiose Grandson-of-the-Black-Stallion behavior, though I was successful in not allowing him to blow anybody into the side of the wash. I told Finneas they were all just going to be passing him later, but he didn't care.

Connie said later, "I hope you didn't tell them it was my horse!" and of course I told everybody that Finneas bulled past, "It's not my horse! It's Connie's horse!" :)

After a couple miles when we got to a disappointingly empty water trough, where I got off to lead, and let everybody we passed go back by us. Finneas was not impressed with my decision, but there you go.

Finneas walked the hot and steep uphill Hart Creek ridge, and we had a somewhat nice Bubble on the way back to camp. I was surprised he pulsed down pretty quick, since it was hot, and he's so hairy.

Connie and Sarah weren't too far behind us, but I made sure I left on loop 2 in another nice Bubble. But on loop 2, Finneas wasn't big and bad Grandson of the Black Stallion, he was just a relaxed, fun ride. He took on a steady trot and carried it for miles and miles. We caught and passed a couple of riders (he was either polite about it, or I took him way wide, just in case), and he didn't really care about it this time, just kept up his steady trot. 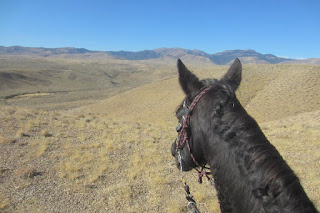 The last 12 or so miles were completely solo, relaxed, and delightfully uneventful - just right to evenly balance out the boisterous first loop.

An entertaining ride on the Grandson of the Black Stallion!

More photos and a recap of the ride at:
http://www.endurance.net/international/USA/2016OwyheeCanyonlands/

Posted by The Equestrian Vagabond at 7:30 AM