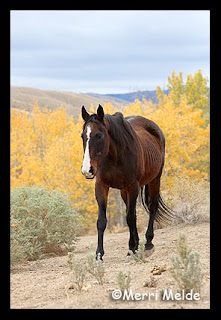 It's late, cold wind howling outside, and I've just about taken that last step into dreamland when a horse whinnies.

Huh? That's a bit odd. Sure, we have plenty of horses out here, but they don't stand around in a herd together and whinny at each other. I couldn't tell who it was or where it came from.

Then another somewhat panicked whinny - that's my horse! Stormy must be separated from the herd! I heard the whinny moving around - he's left behind, and he can't find the herd; and now there's no way I'm going to sleep, listening to my panicked horse running around in the dark trying to find his mates.

Connie says Stormy's a bit senile… and I think she's a bit right. He's 25 now, and he doesn't really rush anywhere anymore, and he's mostly motivated by food, and me. In that order. If I go out to see the herd, he'll come up to me… unless he's eating, or unless he's headed to food. If he's headed to food, he'll mow right past me, as if he doesn't even see me standing there.

He'll often be left standing at the hay feeder eating when the herd leaves to roam up the canyon. Or, he'll be grazing up the canyon with the herd, and they'll leave to start heading home… and he's left behind. He must be so focused on eating that he doesn't notice them leaving.

It's not till I yell, "STORMY! Come on ThurBred!" that he'll look up from his food and realize the herd has left him, and he'll start moseying along after them.

Same thing must have happened last night during the wind storm. Great. How was *I* supposed to find the herd in the dark on 300 acres?

I crawled out of bed, got dressed, grabbed two headlamps, and plunged out into the cold wind. I went directly to the back pen, where Stormy came up snuffling and sniffing to me, I lost my herd!

"OK, Come on Stormy, we'll try to find them." I walked through the pens out to the front, Stormy at my side. He whinnied now and then (the herd will rarely ever answer when one horse is left behind), but he was content to follow me because he knew I'd save him and reunite him with his friends.

It was darker'n the inside of a cow (says a friend's husband) but for the brilliant stars in the sky. My two headlamps barely pierced the desert, as if the wind was blowing the light back at us. Sagebrush and rabbit brush glowed ghostly in my lights, but I couldn't see any eyeballs blinking at us. I had no idea where they'd be. Across the creek? Just up in the front pasture along an old drainage ditch out of the wind? Or way up the canyon? Or way up the canyon across the creek? There was no way of knowing. My lights were too dim to detect any fresh tracks, and we just had some rain anyway, not to mention an endurance ride, so it would be hard to tell what tracks had been most recent.

Stormy followed me contentedly, throwing out a whinny now and then, as we headed up the canyon. The cold wind singed my ears and made my eyes water. We walked on and on, searching for reflected eyeballs, Stormy sniffing the road like a bloodhound.

I walked about a half mile up, and realized how futile it was looking for the herd. They could literally be anywhere on the 300 acres. I stopped, ready to turn around and lead Stormy back home, maybe grab Mufasa and lock them up together so Stormy would have some company.

Then I heard a whinny - it was Smokey calling to Stormy! Bless you Smokey! I walked another 50 feet up the road, and there were the eyeballs looking at us, wondering what the heck I was doing out at midnight strolling in a wind storm with my senile horse.

Stormy didn't show any emotion as he reunited with his herd, because of course he knew I was going to lead him to them.

I turned around to walk back home, and the whole herd followed me all the way back with Stormy. I told them all to keep an eye on the old man from now on.

Posted by The Equestrian Vagabond at 1:40 PM