My New Friend: The Roadrunner 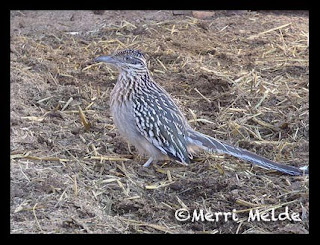 Walking into Jose and Smokey's pen one cool morning to clean horse poop, I was startled to see a Roadrunner hanging out on the tack room porch. I froze, wanting him to stay a while. Jose walked right by him; Smokey walked right by him. I approached Jose and scratched his neck, 20 feet from Roadrunner. Roadrunner just sat there, blinking in the sunlight.

I slipped on the other side of Jose, still scratching him, now 15 feet from Roadrunner. He didn't care.

Jose walked off, and I casually took a few steps toward Roadrunner. He didn't flinch. I walked within 8 feet of him, and sat down. Roadrunner blinked in the sunshine. I struck up a conversation with him. I think he was listening.

After a while, he hopped off the porch and walked 2 feet closer to me. He pecked a bit in the dirt, then turned his back to the sun and fluffed up his feathers, so the sun would strike his dark skin which quickly absorbs heat. I like to think he was showing off a bit for me, too.

I kept talking to him, he continued to be unconcerned, and as soon as he warmed up enough, he turned back around, and stepped toward me again, digging in the dirt. And he walked toward me again, totally unconcerned, even if I moved my hands or shifted my seat. I was conversing with and sitting 4 feet from my new Roadrunner friend. 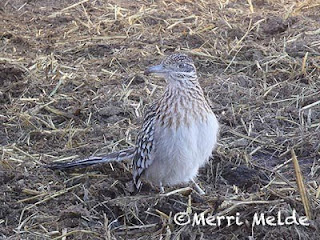 Roadrunners are fairly common in the southwest deserts. They have a zygodactyl foot - 2 toes are directed forward, 2 are directed backward. The X-shaped footprints they leave behind are said to be used as sacred symbols used in some southwest Native American tribes to ward off evil spirits, because the X-tracks disguise which direction the bird is traveling (it throws the evil spirits off track). My close encounter with my new Roadrunner friend happened two mornings in a row. The second day I had my little camera with me. 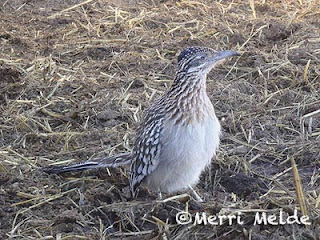 Posted by The Equestrian Vagabond at 12:29 PM