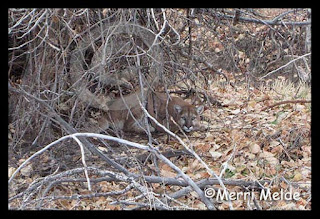 While away from Owyhee in Scottsdale, the neighbors emailed: "we came upon a cougar while hiking up the crick!" Their dogs surprised it on a hike and treed it. The cougar wasn't hungry for humans or dogs - though nor did he appear too terribly worried about them - and everybody eventually went their startled way.

I cannot begin to describe how jealous I was. I've had the privilege of seeing 4 cougars in my life - all happened to be within 6 weeks one summer in Washington, and all from a vehicle - but I am always on the lookout for these furtive, majestic animals. (And I did get incredibly lucky seeing both a leopard, and a cheetah in Africa.)

Mind you, I would not be so thrilled anymore if a cougar got one of our horses. Then all bets would be off. But deer are plentiful around here, and that's what they feed on. And cougars are fairly rare around here anyway, though some ranchers and hunters will tell you otherwise, and who knows when they are watching us out on a hike or ride? I once complained to my forest ranger friend in the Sierra Nevadas when he affirmed, yes, there were cougars around there. "But I've never seen any!" I whined. "Oh," he replied, "but they see you!"

Our horses give a pretty good indication when one is near (every couple of months, it seems); the whole herd acts rather nutso for a day or two. Every couple of winters in the snow I stumbled upon evidence of a deer kill, and one night a few years ago, I heard hideous noises that could only have been a cougar taking down a deer, not 30 yards from my doorstep.

So of course the first thing I do the afternoon I get back from Scottsdale is go looking up the crick for the cougar. What are the chances he's still there, 3 days later? Slim to none, likely; he probably left after the encounter with the neighbors and dogs. Almost all the big animals like cougars and black bears I've encountered in the wild have not wanted anything to do with humans, and they run away if they can.

I creep as silently as possible up the south bank of Bates crick, wind in my favor, but the light, not so much: I'm squinting into the sun, the golden cheatgrass - the color of a cougar - glinting and waving as a roiling sea. I move slowly and carefully, staring into brush, peeking over the bank into the crick bed, searching for a cat lazing on a log or sprawled in the cougar-colored autumn leaves, watching for prints, watching for movement; prowling quietly along (as quietly as a clumsy human can), looking, listening, standing still, hoping… but I wander nearly a mile up-crick and see nothing.

So I give up and cross the crick to the north bank to head back, still looking, but now looking more for owls. I find pellets and whitewash in a jumble of cottonwoods and vines in the crick, in a place where long-eared owls used to roost during the day, but now they're gone, and the occasional great horned owl will hole up during the day, though I see none today.

As I continue back down-crick, lamenting my luck at having missed a cougar by a couple of days - my eyes suddenly lock on a cougar staring at me, hiding 40 feet away under low branches of a tree right by the creek - oh. my. god.

It is a most unforgettable, thrilling, primal moment in life to unexpectedly come face to face and exchange gazes with such a wild, mysterious and near-mythical creature in nature (particularly one who is thankfully not hungry nor interested in me). It isn't any movement nor eye blinking nor anything from him that catches my eye; I just see him and focus in on him, though it takes a moment to pierce that wall of total disbelief, and though I seriously could have walked right by him had I not been looking for a cougar. (And how many other times might I have walked by one and not seen it!!!!!)

I am frozen, rooted to the earth, my jaw gaping, trying not to scream because I am so thrilled. A dozen words whirl and explode in my head like firecrackers: unreal, big, wild, beautiful, powerful, lucky, stunning, ohmigod.

All my senses are on fire. Adrenaline rockets my blood to my ears, racing through my body, down to my toes - boom, BOOM, BOOM, shaking my body so hard he must feel the earth throbbing, because he tries to shrink further under the tree branches. He does not want to be noticed. He thinks I might be a threat. Even as he shifts so minutely further under cover and into deeper stillness, I can sense the utter litheness he possesses, and I am grateful he isn't interested in getting further acquainted with me.

I slip off my big jacket, to swing around and make myself big and make lots of noise if he does decide to come at me, but he remains motionless, staring at me with those mesmerizing, unblinking golden eyes, and I stand stock-still, not breathing, staring at him in utter awe, floored at the chance encounter with this creature. We just stare at each other, in wonder and wariness, two opposite worlds miraculously colliding for a magical moment. Nearby there is a deer's ribcage, a hide he's been feeding on.

I have a terrible urge to step closer, but I know he will bolt away. I feel I could stand and stare at him all day, but he does not want to be harassed, and I do not want to harass him. I slip my camera out and get a few pictures, thank Mother Nature for this fabulous gift, give him a gesture of deference, Thank you for this extraordinary encounter, and I move on, leave him alone, still trying not to scream because I am in shock, thrilled I got to see this big cat. 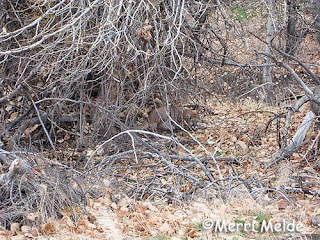 Posted by The Equestrian Vagabond at 4:33 PM