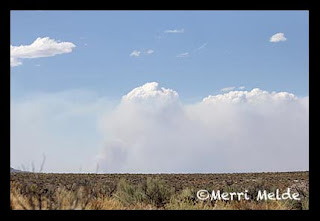 Those aren't pretty fluffy clouds that turn into dragons or pigs or wizards. 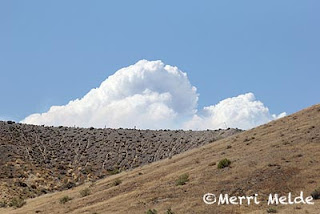 Those are smoke clouds, bubbling up from the Soda fire raging in Owyhee County, the closest edge of the fire being 20-25 miles away from us as the Raven flies. 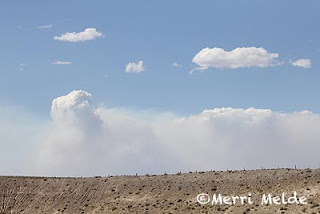 Lightning is expected to have ignited the fire on Monday along the Oregon/Owyhee county Idaho border, and in the last 24 hours, with gnarly winds buffeting the fire across drought-dry, cheatgrass-rich desert and grazing lands, the fire has quickly exploded in all directions, covering over 200,000 acres now (it was 100,000 yesterday!). At one point it grew 1.5 miles in 8 minutes.

As anxious Owyhee-uns (and Oregoni-uns) are keeping an eye on its progress, social media is buzzing and chattering with offers of horse trailers, and places to evacuate horses if necessary.

We are directly east of the lower edge of the fire (in fact slightly to the south), and with hot temperatures and wind forecast for the next couple of days (which is what helped the fire explode rapidly), I'm watching that forecast every hour. For the fire to spread here though, wind would have to come from the north at some point; but so far, winds are predicted to shift between southeast and southwest, up to 15 mph. Lucky for us, but not so much for those to the north, east and west of the fire. 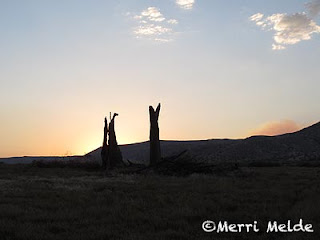 Posted by The Equestrian Vagabond at 7:58 PM