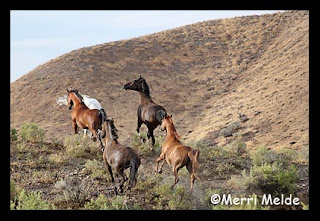 I did not like the looks of the glowering dark blue storm cloud that was headed this way. It had to be heavy with lightning, and if it was, I prayed it would also drop some rain.

As it moved closer, menacing thunder rumbled - loud enough for me to hear. I saw a ground bolt or two over the ridge, saw sheet flashes and whirling sky bolts. And then began the lovely sound of raindrops. Which became a steady drum, and quickly a pounding rain - faster and harder, the wild torrent plummeted until a level of awe was reached and surpassed. It thundered raindrops, a curtain of water, a cataract from the heavens. The clouds turned from a deep blue to white, as the water roared down from the sky. And when it could not have possibly rained any heavier - it did rain harder!

The only other time I have witnessed such an astonishingly hard downpour was in Malaysia, but I was indoors for that one. I had to get out in this desert monsoonal rainstorm. So I did. Cold, pounding, amazing, gorgeous desert rain! I was soaked in a second, cold in two. I splashed through the downpour, sloshed through the new river flowing down the driveway over the creek - then jumped up on the house porch when lightning and thunder cracked pretty closely, and I stood dripping and shivering, gaping in utter amazement from the porch as the rain continued thundering down. The mountains had disappeared behind a curtain of water. The arena was under water. Everything was under water. 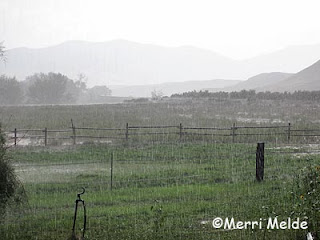 still pouring, even as the sun is chasing the rainstorm away

For some thirty minutes, the battering rain hurtled downward and flooded, then it finally eased off as the cloud moved northward. I squelched out into the arena, which was running off heavily into Pickett Crick - which had been completely dry for the last week. Turbulent water and silt gushed into it from both sides, and the crick churned and boiled brown as it rowdily cascaded downstream.

The sun came out, and the horses started to do what they usually do after a rain - they started to paw and then roll. But they were a little uneasy. Only one horse at a time would roll, then he'd stand and stare up Pickett Crick canyon. A great deal of water was rushing noisily down, making noises the horses hadn't heard before. 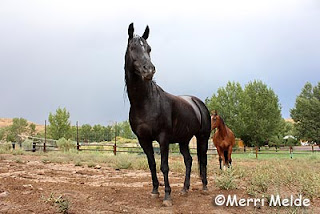 Batman is on alert, looking up the canyon. That's the receding rainstorm behind him 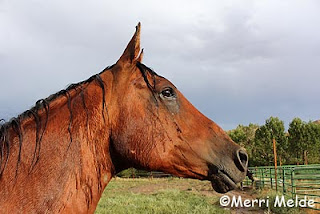 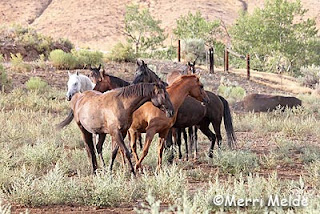 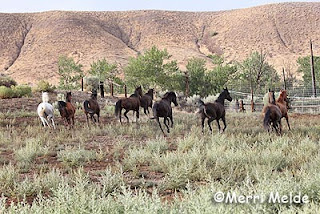 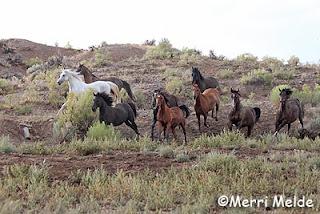 And then it came: rumbling, crackling, a slow-moving thing making its way down Bates Crick behind the horses, shoving everything not anchored deep out of its way: a flash flood! It arrived 30 minutes after the downpour had stopped. The horses ran away in terror to the far end of the pasture. I didn't run away from the flash flood, I ran towards it, a must-see magnificent spectacle.

Tree branches and debris shoved up against the driveway and the two drainage pipes were quickly overwhelmed, and the water shoved up and over the driveway. (Steph got this awesome video of it! - posted here on Facebook)

I was in utter awe, sloshing through very cold water (at safe spots), taking pictures and videos. The water rolled over the driveway like a wave; and a spilling roar of white-water (brown, actually) followed, cascading like class five rapids back down into the creek. It tore out a chunk of the driveway, and took part of a pipe fencing down as easily if it had been string. 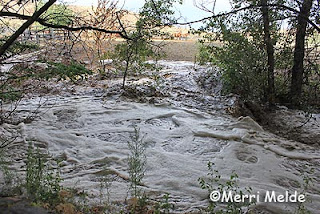 It roared along, joining high-flowing Pickett Crick, and continued tearing on down-canyon. Bates Crick, which just had a light flow that you could step over an hour earlier, was now 4 feet deep, 15 feet wide at places, scouring everything in its way - Mother Nature's way of cleaning out her plumbing system. 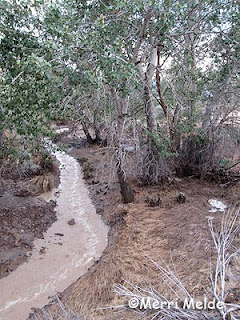 Bates Crick, scoured clean of underbrush and tree parts! you can see how high the water rose (clear to the right edge of the picture). note how brown the water still is, an hour later!

After another half hour, the rushing water subsided, and some of the flooded areas had drained off back into the creeks, leaving behind a thick slimy muddy clay that sucked your shoes off. Sand-foam was left behind in places, such as where high water got caught and churned around in sagebrush before finding its way downhill. 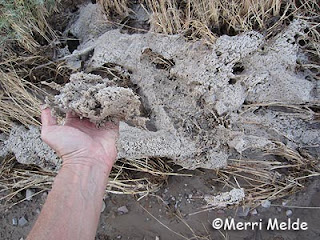 Quail were out soon after, happily chirping away, in search of newly stunned and exposed bugs and worms. 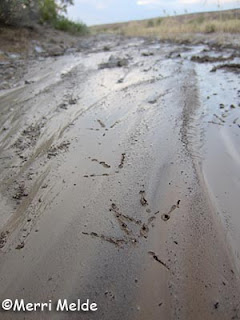 The horses, meanwhile, were still on higher ground at a safe corner of the fence - and there they stayed until the next morning. Days later, the herd still doesn't want anything to do with Pickett Crick, even though it didn't get the flash flood, only high water. They probably won't cross it on their own for another 3 months! 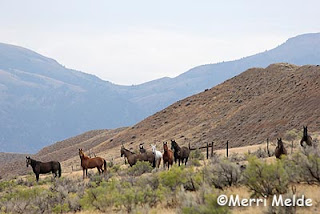 on high ground, not budging for the next 12 hours!

It was a treat and a blessing to witness this rare, violent, awesome act of nature. As a neighbor Matt aptly said, "I love it when nature grabs us and gives us a shake - as long as we're safe!"


*This was particularly thrilling to be a part of, since I missed out on the last flash flood 3 years ago. I saw the cloud that hit, but I was on my way to City of Rocks!
Here are five videos I posted on Youtube of the flash flood:
https://www.youtube.com/user/equestrianvagabond
Posted by The Equestrian Vagabond at 8:17 PM