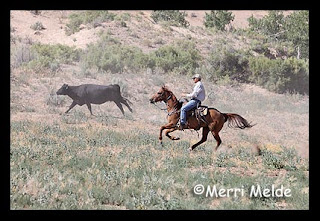 Call it the Pickett Crick Roost. The wily Owyhee Outlaw Bovines have been hiding out here for quite some time. Months, possibly, because it was a couple of months ago that Connie said she saw a few cows and calves up Pickett Crick. All the cows should be up near the mountains and a few drainages and several fences over by now.

I'd been up and down the canyon on horseback several times in the last month or two, and I never saw any cows. But just last week, Connie happened upon them in their hidey holes in Pickett Crick. "About 6 of them," she guessed.

We called the rancher, because it was too far for us to drive them onward, and we didn't know where they were supposed to be by now anyway. And they probably would have been a bit too wild for us. 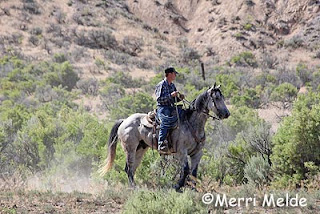 Two of the rancher's boys arrived with a couple horses and dogs and a trailer; they'd herd the cows down to our place and into a round pen, then run them into the trailer. 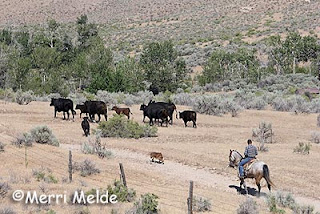 It took a while for the boys to find and flush the cows and calves out of the crick, and to get them to agree to all head down the canyon. Turned out there were more like a dozen of them, with calves wilder'n snot, and some of the cows were a bit rank, too. 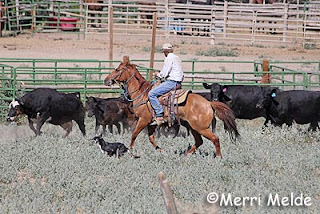 The boys and horses and dogs gently eased the cows down along fence lines toward the house and the round pen. A couple of wily calves tried to make a run for it, but the cow dogs took care of them. It was one of the cows that, when they got close, decided, nope, she was *not* going in that round pen, because she liked her Pickett Crick Roost just fine thankyouverymuch, and she busted loose and all hell with it, the herd scattering and stampeding back up-canyon. 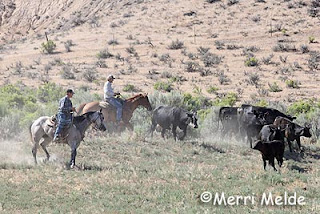 Horses and dogs took off after them in a cloud of dust, and after some more wrangling (and setting up another panel that would angle the cows in the round pen gate), the boys and horses and dogs convinced the herd to squeeze into the round pen. 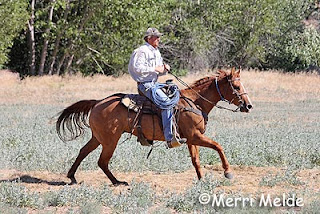 One cowboy rode back to fetch the trailer. He backed it up to the round pen, and got all but 4 calves on the trailer. It took 3 cowboys on foot, a couple of dogs, and a couple more fence panels to guide/squeeze those Owyhee Outlaw Calves into the trailer, and then off they headed to their new mountain hideout, to continue their wild and wily ways.

Posted by The Equestrian Vagabond at 7:40 PM