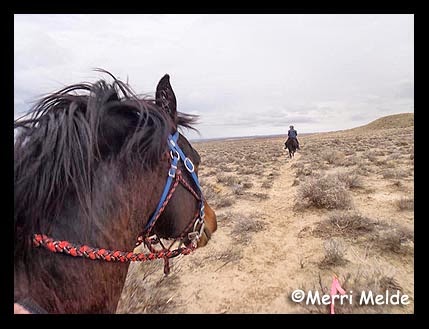 I like a good cold rain while riding on a horse who possibly has a stick of lit dynamite up his butt as much as the next person (oh - wait - I am the only person I know who likes the good cold rain while riding, though I could do without the stick-of-lit-dynamite-up-his-butt part), but the thought of waking up before dawn with the cold rain already falling, and going out and saddling up in the rain for a 90%-chance-of-rain-and-45*-and-wind day is a bit daunting, even for me.

But when my alarm went off for the Owyhee Hallowed Weenies, the last ride of the season, and it wasn't raining yet, I was pretty happy. And when Carol and August, and Dudley and I found a bubble at the start (and in fact, the entire day - it was like we were the only ones out on a 50-mile training ride), with no riders in sight ahead of us or behind us, all day, and Dudley never had a stick of dynamite in him, it turned into an awesome ride. 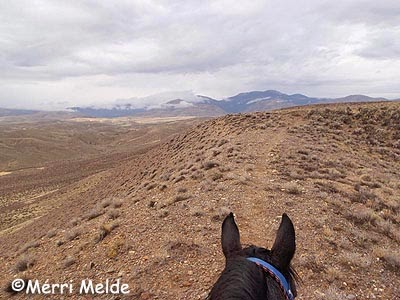 It was an awesome ride, even when, middle of the first 15-mile loop, I decided to put on my rain jacket right before the rain started coming down, and I reached in my saddle bag and pulled out… my rain pants.

I tried sticking my arms in the pant legs - no go. So I knotted the pants around my neck like an unfashionable rubber scarf for a while, till Carol remembered she had an extra raincoat with her. (Note to self: spray paint your black rain pants bright orange, so you don't get them confused with your black raincoat). 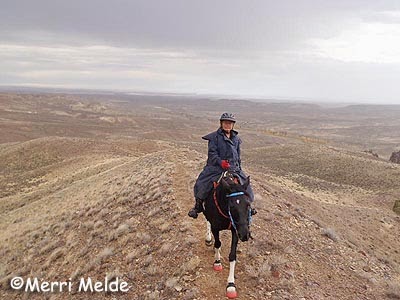 It was an awesome ride, even in the rain, that continued all day, and the cold, which was only mild at 44*, and the wind, which you were shielded against with your proper raincoat. It was an awesome weather day for a horse and rider who don't do so well riding in hot weather (Dudley and me).

It was an awesome ride, because the Raven, dressed as a cardinal for Halloween, rode along as usual! 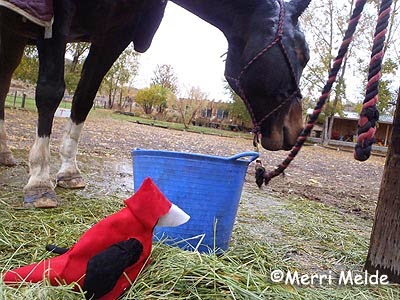 It was an awesome ride, because it was Dudley's fourth 50-mile ride of the year, an awesome accomplishment for the big beast I fondly call, among other things, a Recovering Obesaholic. He's come a long way and accomplished a lot this year. 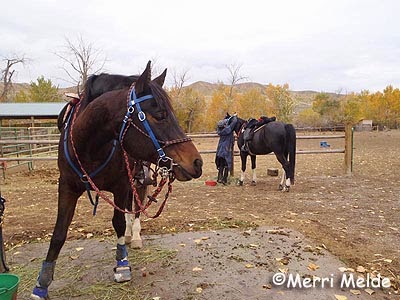 He'll keep up the diet and the exercise this winter (in between his Trick Training) and aim for an even better endurance season next year! 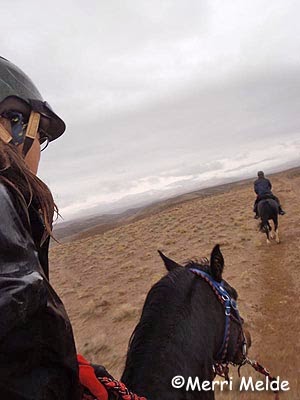 For a ride recap, and results and more photos, see
http://www.endurance.net/international/USA/2014OwyheeHallowedWeenies/
Posted by The Equestrian Vagabond at 5:50 PM