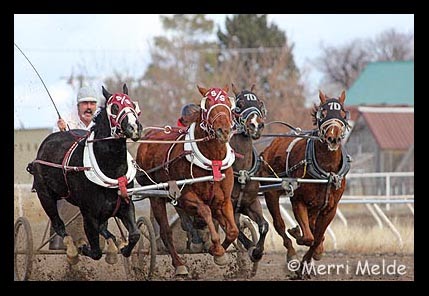 That's what you heard when you stood on the rail, as two (or three) pairs of horses pulling chariots and drivers thundered down the stretch in the Idaho State Chariot Racing Championships at Rupert Downs, Idaho, on a cool and muddy March weekend.

I'd never heard of chariot races, besides the Ben Hur days, even though they're pretty much limited to Idaho and Utah, and a few areas of Wyoming.

I didn't know what to expect - wild and crazy people and horses, crashing chariots, riffraff spectators. It was nothing of the sort, and it was nothing short of exciting fun. There were no crashes, the horses were ripped - cut - as in nice, sleek, finely-tuned Quarter Horse racing machines, and it was a friendly family atmosphere.

Fifteen races were run over a muddy track. The horses run over just about anything, I was told - dirt, mud, snow. Most of these horses race on the flat tracks in the summer. This is a way of keeping the horses fit over the winter. Besides, it's obviously a lot of fun.

Most of the horses were decorated festively, with pompoms and ribbons in their manes and tails, sparkles or glitter or gems on their butts, bright colored blinkers and colorful harnesses. Their stables had taken time and care to deck them out, and the horses knew they were something special. 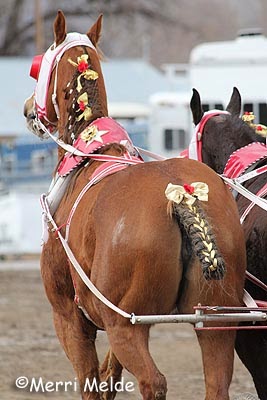 It sometimes took a handler for each horse, or a pony horse for each, to escort them onto and down the track, but once the horses came out of the gate, they were focused and fearless, fast and furious, thundering down the track with their drivers leaning forward, yelling encouragement. Some races were won and lost by nostril hairs.

"I thought these people were crazy to drive these chariots," one guy said, "and then I did it. Now I'm hooked!"

It's easy to see why!

(If you're around Odgen March 22-23 and 28-30, you might want to check out the World Championships!
http://smithstix.com/events/item/root/world-chariot-races-mar-29-14)

Here's a slide show of a few photos of the day:

Posted by The Equestrian Vagabond at 9:59 PM